Once in August – A Story, A Poem-ish, A Reflection, and Now

Once in August…50 years ago

A baby was born to very young parents who couldn’t afford to bring her home. The hospital required ten dollars. Although there wasn’t ten dollars in the account, the clerk suggested the father write a check – he did and they bundled the baby home.

There wasn’t a crib yet, but the baby was very tiny (as newborns tend to be) so a dresser drawer was just snug enough. 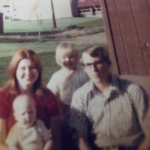 Probably about 46 years ago.

Once in August…45 years ago

The little girl went to her first day of school. This was also the day her mother moved out and somewhere in this time, she began keeping memories.

However, it’s not a viable resource, her memory.

Once in August…44 years ago

Either way, there was a lawn party, with the egg racing game, long tables made of wooden planks and concrete blocks. Ice cream and cake…

That was the last big bash until she turned 16. In fact, back to the memory issue, the only birthday celebrations she can recall are the aforementioned unclear-what-year-party outside plus a few occasions with watermelon and grandparents and there was a slumber party at 13 (or so).

At 16, having found “her people,” she played a  supporting character in a group of teens who bubbled with ambition and intelligence and humor…Good humans.

For the party, she made a dance worthy mix-tape, there were snacks and pizza, and they laughed and danced the night away in the front room with the big bay window and no furniture.

Youth is a volatile time. Some of these friends saved her life. More than once.

She celebrated! She learned to gather her trusted friends and sing together, shout and laugh together. She threw whatever size party she felt like at the time and spun around in the glow.

Once in August…10 years ago

She celebrated BIG over a four week stretch, including a quiet gathering in a rose garden, another bash at a concert venue, and still others “in between.”

Then, she felt done with all that. Birthdays since have been  happily and intentionally “low key.”  Maybe a dinner party, maybe a night out, but not such a thing. And she’s been perfectly content with that progression.

Perhaps she got it all out of her system. For now, anyway.  Good thing since 2020 isn’t a good year for a big bash. More on the alternate festivities to come.

There’s hot coal in her belly, gravel in her shoes, and a heavy, invisible pack weighing upon her shoulders. Any good witch can see these and many have told her to let go. But, on she moves, with all of this in tow.

Perhaps in that pack are the heavy pieces of the past, abuse and neglect, hunger and pain, bullying and exploitation.

Those sticks and stones, bruises and scars, did not keep her from setting goals, however, or pursuing big dreams.

She writes. She speaks. She works. She loves. She dances and sings.

She cries, fumes, and grieves. She learns, grows, and teaches when she can.

She is often pulled back and under the tide. She pulls herself up, gulps the air, and fights the current. For herself and for those she can break the waves. She navigates through the storms. Calm seas are kind but not the only horizon she knows how to weather .

She is frightened and brave. She is fragile but not broken.

There’s hot coal in her belly, gravel in her shoes, and a heavy, invisible pack weighing upon her shoulders. But, forward she goes with all of this in tow.

More than once in August I’ve hosted garage sales, to clear the clutter (all filled back in) and add to the coffers (now all spent).

More than once in August I’ve been delighted with buying notebooks (on sale!),  new pencils, and planners.

Once in August the Huffington Post began publishing my words, our story. I pushed back my chair, shook with excitement, and stared at the emailed invitation.

Once in August Marcus and I returned from our first international trip together. We walked the busy streets of London, several miles across the old city from boat to theatre, hotels to pubs. I got lost several times, Marcus and I take the long way everywhere it seems.

Once in August Marcus and I made this fun video to promote his book. (Still lots of books to go…)

This August, hmm, who knows? 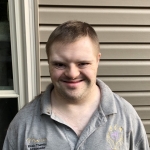 I’ll tell you this, Marcus is very excited it’s August and my birthday month. He’s ready for another “Zoom” party and has many games in mind.

His enthusiasm and plain old zest for life – it’s refreshing amid this angry and scary old world. Our lockdown, insomuch we limit our and Marcus’ exposure, is not understood by many around us, considered overreacting by some and too lax by others. Again…I don’t know. I’m doing my best to walk the line of productive but safe. I will err to his protection as his light is worth it. For this August and every moment we can keep and hold.

This is a “Finish the Sentence Friday” with “Once in August…” Thanks Kristi! (Another August Birthday) and you can join in here!