Three years ago while in a fit of rage and passion, I wrote an essay called “Arguing Eugenic 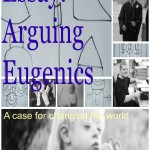 My son was 20 years old at the time. After the initial drafts were tuned, and honestly even tamed, the real proofing process began.

Can you believe at that time I had never heard of the concept of People First language?

Consequently throughout the initial draft I wrote things like, “a downs child.” My uncle read it and suggested instead to say “a child with Down syndrome,” for example. After changing each reference, I looked again and was amazed – and yet not – at the difference. There was power in the order of the words.  How could I not have known, seen, realized this before?

I wrote an entire paper with the intention of showing others the value of the life of my son before I saw, myself, first hand, the power of people first language.

This is an example of two things:

I mention this today because a fellow blogger who I admire has posed the hop – Ableism and Language.

This is an area that, though I’ve talked about it via blogs here and here, admittedly I’m still working to articulate clearly in both my own reactions and the lessons thereof. With that in mind, this may seem a bit random…

If you, like me not that long ago, have no idea what Ableism is, let’s start with that. Here’s the Wikipedia Ablism Definition:

“Similar to many of the assumptions underlying the medical model of disability amongst many clinicians, the “ableist” societal world-view is that the able-bodied are the norm in society, and that people who have disabilities must either strive to become that norm or should keep their distance from able-bodied people. A disability is thus, inherently, a “bad” thing that must be overcome. The ableist worldview holds that disability is an error, a mistake, or a failing, rather than a simple consequence of human diversity, akin to race, ethnicity, sexual orientation or gender.[3]“

Then let’s listen to Jen at Down Wit Dat’s own words: “I cannot say this enough:  whether intentional or not, whether a word was “once accepted” or not, whether you know/knew/have someone in your life that the slur may pertain to, it does not matter.  A slur is a slur, no matter how you try and dress it up afterwards.”

This brings me back to the thought of intention.

I think it’s safe to say that sometimes people talk without thinking. Does that make it right? It makes it forgivable – until they know and or recognize better.  When a friend uses the r-word, for example. Do I want them to stop using it as a sign of respect to me? No, actually, I want them to stop using it out of respect to the human condition. I want them to recognize – what do you mean by that? Stop, really, what do you mean by that?  Now, is that really what you want to say? No, if you’re a friend of mine, I’m sure it’s not.

But there are others who intend to slur, yes, that is their intention all along. Last week I went to a company’s Facebook page – long story short – I saw a meme with the R-Word prominently focused as a comment on one the company’s posts. To be clear, the company did not put up this meme – but they allowed it.

Well, I went to the corporate website and filled in the complaint form.  I didn’t want to draw attention, but realized that the fastest way to get the social network admins to address this would be where they are – back on Facebook.  Because (on Facebook) I am a “page” and not a profile, I couldn’t message them. So I posted to their page:

I did not get a reply from the company – but they did remove the offensive picture. That didn’t stop me from shaking my head and stewing about it most of the day because, frankly, who doesn’t know this is offensive? Who on a corporate social networking team could really believe this is OK? Oy.

Of Course I know words have power. 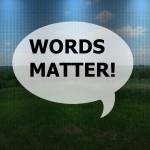 I’m a writer for cryin’ out loud. And a reader. Just yesterday I read this:


“But it was the chance carelessness of it which particularly appealed to Dirk because words used carelessly, as if they did not matter in any serious way, often allowed otherwise well-guarded truths to seep through.”

– From Douglas Adams, Long Dark Tea-Time of the Soul. That says a lot, ya know?

The thing about truth is that it is malleable. It is personal. Also, it changes from day to day.

And yet, it doesn’t.  This quote is from a movie made in 1938 and it is the first thing I thought of when I read the ableism prompt:

Grandpa Martin Vanderhoff: Penny, why don’t you write a play about Ism-Mania?

Grandpa Martin Vanderhoff: Yeah, sure, you know, Communism, Faschism, Voodoo-ism, everybody’s got an -ism these days.

Penny Sycamore: I thought it was some kind of itch or something.

Grandpa Martin Vanderhoff: Well, it’s just as catching. When things go a little bad nowadays, you go out, get yourself an -ism and you’re in business.

There have always been ism’s. Ism’s that are designed to keep people out or close people in. Isms come in all shapes and sizes. This ism isn’t new, but it now has a name.

To the second point, When you know better…

Kari Wagner-Peck earlier this year wrote an Open letter to Chuck Klosterman.  She addressed his choice of language in his books. His reply was the best possible reply.  I won’t spoil it all for you – you should read both her letter and his reply. However I will say it is an excellent example of when you know better – do better.

It is also an excellent example of a person taking the time to educate in a compelling and reasonable way.

Should we all be doing this?

It’s not as easy as Kari made it look, but if we all do it – a little bit – well, what can happen?

These posts brought to you by:

Add your post now!
Feel free to leave a note and come back around, too 🙂
For emailed updates, not too frequently, Join the Club Here.