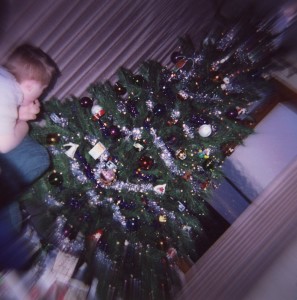 Christmas Pic some years ago…

Set the scene: Marcus as a little boy and a car full of friends, driving through the fancier neighborhoods of town to look at Christmas lights and singing Christmas Carols. “Santa Claus is Coming to Town,” a perennial favorite, of course “Jingle Bells,” “Silent Night,” and several we only knew half the words to. Someone asks Marcus what songs his class would be singing in the upcoming Christmas Program.

“Please Love A Duck.” He said.

I laughed, loudly, Forget the farm!

My inclination when we reach a roadblock like this is to…change the subject. Sometimes it needs space.  Often, we tag team.  If Marcus can’t get one of us to understand, he moves on to the next parent or friend. In this circumstance, he was surrounded by 4 adults who wanted to get this.  Quinn’s method is to repeat what he’s hearing over and over until the words come out with what he means. (There’s actually a game like that, Mad Gab, I think. Quinn’s quite good at it, makes me crazy.)

SO, here we were, each of us stewing Please Love a Duck through our heads and trying to match it to Christmas.  Have you got it yet?  I can’t remember which of us, except that it wasn’t me, called out – Feliz Navidad!

“Feliz Navidad!” We all cried out.

Of Course!  The only logical carol to choose for a classroom of young children who have difficulty communicating? I mean, why not really? OY!

Communication Can be Tricky

Fast forward. (Parents with young children, I mean it. Someone hit the remote and here we are in a flash 10+ years later, 15 maybe?) Communication is still tricky for Marcus, more with strangers.  I liken it to handwriting, particularly mine.

I have, let’s just say, terrible handwriting.  Now there are those who will impulsively say, “Oh, I have bad handwriting, too.”  It is likely yours doesn’t even compare.  Not that this is a competition you want to win, but my handwriting is a legend in its own right.  When I am writing for myself, it is impossible for anyone else to read.  When I am writing for someone else, and there is a big difference, it’s still difficult for people to read.

I used to defend my handwriting, afterall I was doing my best and I could read it so what was the big deal?  Then I went through a phase where I blamed my childhood, it’s not my fault no one took the time to teach me to write right. And when I slow down and really try to write better, it is sometimes even worse and inevitably causes me great frustration.

Plus to me, it made and makes sense. In fact, on the upside, I can read pretty much anyone’s handwriting. At work, people used to bring me notes from customers or others in the plant and almost always I could read anything. In fact, in many cases what was hard for the other person to get looked obvious to me.

Now, there are a select few folks who have gotten pretty good at reading whatever I put to paper.  They’ve figured out the code.  Then there are times when people don’t even try to read my note. They see what they perceive as scribbles and “write off” entirely what I am trying to say. That makes me crazy.

Is that right? That I expect someone to spend the extra effort to read my communication?

And this, friends, brings us back to the point…

Marcus needs a little extra effort to understand sometimes.  Some people seem to give up the moment he starts to speak, sadly, some maybe even before that. Marcus recognizes this in people quickly. He knows who’s going to engage with him and pretty much returns the favor to write-off anyone who isn’t going to make the effort.  (more on this later)

For me, most of the time I understand him the first round, as do those closest to him.  But there are still times we hit a wall. And it can be frustrating for both of us.  Growling may be involved.  Like me with my handwriting, he may try to go slower and when even that doesn’t help, it’s even more defeating.

Recently Marcus had what I considered to be a communication break through.  Often, as mentioned, if we get stuck, I’m inclined to give up and he just repeats the word in the hopes I’ll eventually get it.

This latest case came when I picked him up from a rehearsal for a Christmas Musical he is participating in. I was asking him about making new friends and he was giving me the role-call of names. He got to Jim.

This is good.  I thought. He’s going to explain the word. Yay!  “Jim is like someone on Broadway?”

“A toaster on Broadway…” I said quietly, so he knew I was trying to think through it.

Whew.  And I have to tell you.  This was exciting to me.  I loved that he took the time to talk me through this with the connections that we have in common.

Now that Marcus is taking voice lessons he is more excited than ever to get words right.  So we hope in the New Year to get back into some speech therapy.  He and I will be looking at his budget next week and choosing priorities.

Whereas Marcus is most concerned with whatever it takes to get him closer to making a musical, and of course, I’m all for that, the side effects of improved independence and truly, safety, will be good too.

In the meantime, Merry Christmas and Please Love a Duck!

If you’d like updates from Grown Ups & Downs, don’t forget to Join the Club. We’d love to stay in touch. This is a #TBT Post – originally published in Dec of 2013. My how time flies!