A Recap of the Audition Marcus Won

**This is a repost of when Marcus and I travelled to Denver for the Global Down Syndrome Foundation’s “Be Beautiful, Be Yourself” Fashion Show auditions, with added Facebook Video**

We walked into the small room outside the theatre designated for the auditions and found ourselves among many bright, engaged, and excited faces. We were among children and adults with Down syndrome all ready to shine.

For me, the response was visceral, coming from deep within me and travelling to the edge of my skin. I literally had to catch my breath. I had never before been near so many of “this” face, bright and laughing and preparing, together near me.

Plus, I was nervous. Both at being in this crowd of strangers and also for Marcus and the event itself. Marcus was nervous too. We chatted with a few folks. Mostly we hovered near the door.

SURE – this was the perfect opportunity to spread the word about, oh say this blog,
or The Road We’ve Shared, or the Facebook page.
I Know That! No. I didn’t give out any cards.
This wasn’t about me. This was about Marcus and

after all of my rambling – let me tell you what he said:

First,  the children and adults lined up in groups of 20 or so. Each group was taken back stage then one at a time the model walked to the stage, greeted the judges/audience, turned to the back of the stage, got to do it again, then exited. To the right of the model was a huge portrait pre-supplied, and to the left was a live feed of the stage. There were bright stage lights and a fun songs to set the mood.

To my knowledge, the models were not shown any details about what to do. Marcus was in the second group, so while lining up, he watched the first group and had to process and decide his own “moves.” There were also two Broncos’s Cheerleaders that guided and directed the models on the stage. (Nice touch, GDSF.)

OK?! Oh, and you should know, Marcus also had to deal with me for ½ of the first group yammering nervously in his ear. Most of which he answered with, “Fine.” “I’m fine.” Or “It’s fine.” Sigh…I probably wasn’t helpful, I’m such a mom.

Still with me? SO – he does his thing. The auditions proceed and wrap-up. I’m super proud of him, and everyone. 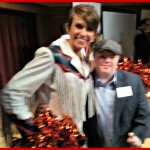 We bee-line out the door, well…we did stop for a photo-op with Sam, Marcus’ favorite Bronco cheerleader. And also a hug with a new friend. Then we head out. As we’re walking to the car Marcus exclaims, “I won!”

Now for you literalists in the crowd, we won’t know the “results” of the auditions for several weeks. I do not envy the judges or the GDSF for the choices they have to make. Seriously. However, if you’ve ever done something new, exciting and scary as hell – you won. And Marcus did just that. Again, super proud.

Once we got into the silent security of the car, I wanted to know more about what Marcus was thinking. As mentioned, my own emotions surprised me, what about him? And it was a bit of a whirlwind of lights, stage, pressure, people…

“Marcus, that was a lot,” I said, “I could tell you were busy thinking. Can you tell me what you were thinking through all of that?”

“Yes,” he said as he leaned back and put on his seatbelt, “Don’t panic.”

I can’t possibly add to that.
Thanks for stopping by, feel free to leave a note or
This for emailed updates, not too frequently, Join the Club Here

This is part of a post that originally went “live” in June. I decided today to share the video kindly taken by a new stranger/friend who sat behind me during the audition so that I could applaud and yell 🙂 Check it out: