Love and the Rockettes in Omaha

A break from the heavy stuff 🙂 today. Let’s talk theatre and what’s coming to Omaha from Broadway Across America and Omaha Performing Arts. Marcus and I were fortunate to get a sneak peek of the upcoming season and now it’s about to round the corner.

He was initially most excited, with a loud gasp as the name floated on screen. Motown: The Musical. It’s no secret Marcus is a music lover, and who doesn’t love Motown music? When the OPA announced the line-up they invited a few of the performers to share bits of the show. Then we just happened to meet some of the cast in the hall. Marcus was wearing a cool hat (imagine that) which brought compliments, and he got a hug from the woman performing the role of Dianna Ross (imagine that) and I’d love to show you pictures but… none of them turned out. (Argh, imagine that!)

When it comes to Broadway, OPA is also bringing Pippin (which I am stoked for), Camelot, Beauty & the Beast, Mamma Mia, and Once. Marcus has already purchased his tickets to his top options. (You can get yours here.) 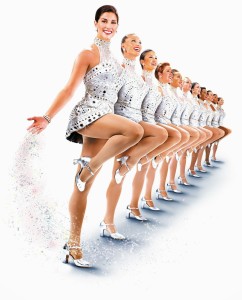 The first in the line up and a first for Omaha is the Radio City Rockettes Christmas Spectacular. (cue: ooooooooooh) A group of Omaha Bloggers were invited to meet and greet with a few of the Rockettes, Marcus and I were lucky enough to attend.

It was an extra special, fun, Q & A for a few reasons:

1) One of the Rockettes, Rachel Borgman, is actually from Norfolk, Nebraska and will be dancing in Omaha during the Rockette’s tour here. How exctiting!

2) Because the bloggers each have their own areas of expertise and blog themes, we got answers to questions varying from fashion and makeup to theatrics to personal inspirations and guidance for young dancers. For example, we attended with our good friend Robyn, who blogs at Coolestmommy.com, check out her reaction to the event here.

So here’s a pic of the room of bloggers and the Rockettes. We sat in the back, an old habit from my schoolroom days. 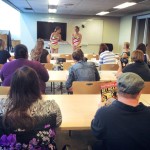 After the introductions the questions came without stop. Robyn sat between Marcus and I so I asked her to ask him (via whispers) if he had any questions. He whispered he wanted to tell them he was Elvis. “OK,” I said, “When we take pictures after.” Because we were promised a chance to take pictures at the end of the event. SO anyway, as the facilitators watched the clock, the eventuality came, “Alright, one more question then we’ll move on.”

He stood up and said, “I just want to say…I love you.”

Awwwww. Who wouldn’t want to end a Q & A with that?! Once we got to the picture phase (which he was then ushered to the front of the line) he told them that he was Elvis. He smiled for the pictures (which thankfully Robyn took because, again, mine didn’t turn out), kissed each Rockette’s hand, got hugs, then did an Elvis Hip swirl to show off, ‘Cause, why not? Once we got back into the car he said, “I love girls.” Ah, yes.

If you would like to see the lovely Rockettes, not quite as close as Marcus, but a spectacular none the less, get your tickets now . The shows will run Nov 13th through Nov 30th at the Orpheum Theatre. #GetSpectacular #RCCSOmaha

*FYI we enjoyed the invite to the Q & A but aside from that have received no monetary or other compensation for this blog,
as always opinions are my own. Full affiliate disclosure is here.

If you’d like updates, not too often, join the club here.