Sikora’s Guide to the Galaxy 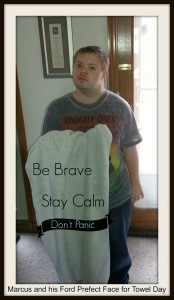 Today we let our Geek show. 🙂

May 25th is Towel Day. Towel Day is in honor of Douglas Adams and The Hitchhiker’s Guide to the Galaxy.

The story begins: “Far out in the uncharted backwaters of the unfashionable end of the western spiral arm of the Galaxy lies a small, unregarded yellow sun. “

Even as I type this I can hear the original BBC theme floating through my brain, with it’s fun, swishy, science-fiction sounds fading into the far reaches of the universe….

Sigh. Takes me to my happy place. Adams’ books take the big (universe, Hello!) and makes it personal and takes the personal and shows us just how really, really small and yet vastly connecting each personal moment is. One of his tools to demonstrate this is a towel.

A towel, it says, is about the most massively useful thing an interstellar hitch hiker can have. Partly it has great practical value – you can wrap it around you for warmth as you bound across the cold moons of Jaglan Beta; you can lie on it on the brilliant marble-sanded beaches of Santraginus V, inhaling the heady sea vapours; you can sleep under it beneath the stars which shine so redly on the desert world of Kakrafoon; use it to sail a mini raft down the slow heavy river Moth; wet it for use in hand-to-hand-combat; wrap it round your head to ward off noxious fumes or to avoid the gaze of the Ravenous Bugblatter Beast of Traal (a mindboggingly stupid animal, it assumes that if you can’t see it, it can’t see you – daft as a bush, but very, very ravenous); you can wave your towel in emergencies as a distress signal, and of course dry yourself off with it if it still seems to be clean enough.

More importantly, a towel has immense psychological value. For some reason, if a strag (strag: non-hitch hiker) discovers that a hitch hiker has his towel with him, he will automatically assume that he is also in possession of a toothbrush, face flannel, soap, tin of biscuits, flask, compass, map, ball of string, gnat spray, wet weather gear, space suit etc., etc. Furthermore, the strag will then happily lend the hitch hiker any of these or a dozen other items that the hitch hiker might accidentally have “lost”. What the strag will think is that any man who can hitch the length and breadth of the galaxy, rough it, slum it, struggle against terrible odds, win through, and still knows where his towel is is clearly a man to be reckoned with.

– Douglas Adams: The Hitchhiker’s Guide to the Galaxy

And from the original BBC mini-series: 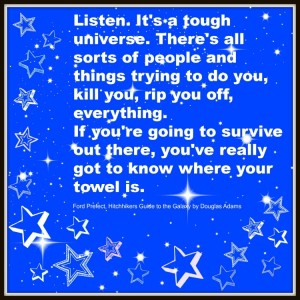 Marcus suggested we write a Sikora’s Guide to the Galaxy. His suggestions include:

“No Tables. Only Booths.”  (Marcus has a strong preference for booths in restaurants.)

“Be Brave. Stay Calm.” (Sounds a lot like Don’t Panic)

Then he began casting friends and family into the show.

For those of you who have no idea what I’m talking about: Please, I implore you, read The Ultimate Hitchhiker’s Guide to the Galaxy

For those of you who do know Douglas Adams’ work but didn’t know about Towel Day:

There are two “official” towel day websites: http://towelday.org and http://www.towel-day.com

There’s also a Facebook page (of course) and the hashtag is #towelday. whew.

Last year while was making my own attempt at writing a science fiction piece with bits of humor, during my stalling and ready to cut and run state of distraction, I found out via Twitter it was Towel Day. Then I realized, “Wait. I’m 42. I. Must. Do. This.”  and I carried on.

*That little piece of work is still looking for a good home, so Douglas, if you’re reading this from the stars, maybe help a girl out?

A few nights ago Quinn and I watched a TV documentary on Douglas Adams. How his brilliant words did not come easy. How he painfully chose, for comic weight, each word and phrase. Even the number 42 was chosen to be the best possible punch-line. And all along the way how he tried to help and save the planet earth, though truly, he knew it was doomed.

Alright! – Now I’m going to make this easy on you. Here’s what you need to be ready for next year: 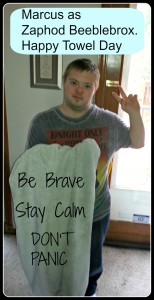 And More! i.e. if you’re interested in the Hollywood version (phme) or better, any of Adams’ other books: Douglas Adams