A Gift From the Universe to Change the World 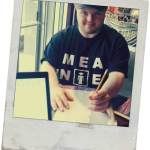 My son, Marcus, and I have had many writing sessions and meetings with collaborators at our neighborhood coffee shop, particularly while we were working on his first book for children and the accompanying animated short. We also wrote the speech we gave at the United Nations building there earlier this year. Today I write solo and the notebook to my right has the lyric, “The universe is resting in my arms” (from Nina Gordan’s song “Tonight”) written and

I could dig back into the notebooks.

“A realist,” he explained to me, “doesn’t think the worst will happen every

Marcus the Musical and the Dreamer

One of the things I love about my son is his ambition. His dream of creating and starring in his own Broadway Musical is never daunted. Last time we went to the theatre to see a Broadway Across America production he stood in front of an empty poster frame and gave me the thumbs up. “This,” he told me, “Is for Marcus the Musical.” He believes in himself and this dream.

The fact that he can’t read a script doesn’t concern him, he's preparing his own. The burdens of official training in the areas of playwriting, acting, stagecraft, and so on…not an issue.

I would never, ever, tell him he won’t, or worse can’t, reach this dream. His passion is clear and he spends both waking and sleeping moments working toward this.

Another 23 year old without training and facing the uphill, dare I say impossible, mountain of learning and struggle, would likely give up. In fact, most young people are talked out of their dreams and move on because they “know better.”