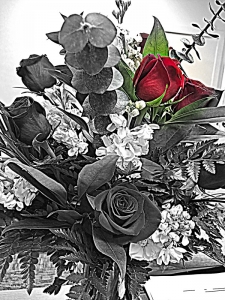 Until she realized that a living rose bush, even with all its thorns, better reciprocated the life and beauty she craved, more than any short-lived bouquet

Even under two blankets, Jimmy lay in bed shivering. “It had to be the coldest night of the year?” he complained.

“For the perfect mountain wedding, I guess so,” Amy cooed her reply. “What did you expect up here?”

“Heat. I expected heat.” He rubbed his hands above his chest and faced the ceiling as he ranted. “I also didn’t expect to have a fully dressed bride on my wedding night.” Under the covers he reached and pinched.

She squealed a pleased reply “I don’t care how grumpy you are.” She curled herself under his arm and over his chest, “I’m happy.

Through the Dreamers We Hear the Hum 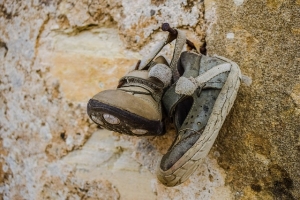 Boots once muddied from play now covered in sand. Nights full of treacherous poison and days under the beating sun. The child sleeps without rest, walks along, follows. She yearns for the bed behind them. It was shared, but home. The promise ahead is…cold.

She trudges in boots broken through to her tiny calloused feet and hides as a car passes. “Through the dreamers we hear the hum,” plays from the radio, the air-conditioner blares, to the next gas stop or rest stop.

Not for her though, the

My Writing Addiction and Now TwitterFlash

Friday, the hashtag #WhyIWrite trended. Today I am happy to join a Linkup “Why I Write” with the Finish the Sentence Friday gang. (Which, when I can get to it, is generally Finish the Sentence Sunday.) And also tell you about a super flash writing challenge.

#WhyIWrite I can’t seem to not.

Many writers love to talk and read about writing.

I’m no exception. This next piece of prose is an “oldie” for me.  So it feels