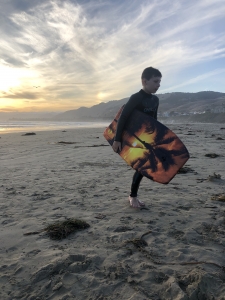 My nephew was on a California beach on his 9th birthday. He looks pretty comfortable with beach life, doesn’t he? I expect he sees the ocean as a giant adventure.

Some people look at the ocean, the waves, and colors and it brings a sense of calm. I have a hard time even imagining that emotional response.

Over the last few years, I’ve had occasion

However, no matter how thankful we, as artists & writers are, to JK Rowling for breaking open the industry and getting kids and adults to read again, we now find ourselves in a new cycle of commercial is-it-as-good-as Rowling's work for YA, for wizardry, for adventure, for commercial viability...The industry had to be convinced that Harry Potter was viable. Now it is all part of the cycle.

So where will my story fall into all of this? At the moment at Sondheim's third point:

In theory, I shouldn't care. I need to write the best story I can. That's how it all started. I had a story, a giant what-if, burning under my skin and it came gushing from me. Then I began learning everything I didn't know, I don't know. I've been tuning my craft. I've analyzed and read and run my head right up against a giant stone wall. The words that once flowed from me are now choking in my throat. All of the demons that writers know so well are included, for a rundown of these Chris Mandeville shares the list with pictures even!

And now a snippet from The Innocent Prince Series

The Queen lay exhausted from the toil but still alert enough to notice the minutes that passed between them. She held her own breath in wait for the babe’s cry. Finally it came, a small burst from the child to claim his place. Then she waited for words of ease from Magdeline.

The Queen’s anticipation ran through a fog of fatigue. Magdeline wrapped the child and placed him in his basket. She completed the process of caring for the mother with swift efficiency. The Queen’s exhaustion overruled her anxieties and she lay for these moments in silence. Magdeline covered her and then attended to the babe.

“Tell me we have a Prince,” the Queen said softly.

“I am anxious to meet him.”