The sun shone in through the small hopper window near the ceiling. I woke up slowly and watched the sun beams that drifted to the floor. I knew it. I was a mother. From the outside I did not look…ready.

In my heart, I was. I smiled. I quit smoking.

The next week I went to the Doctor’s office for a pregnancy test. I didn’t bother buying one from the store because, well, as I said – I knew.

The test came back negative. The nurse and I spoke a bit about why I thought I was pregnant, her head shook dismissively as she wrote in the chart. I began eating lemons, friends looked at me and shrugged. Three weeks later I bought a pregnancy test at the drug store and it confirmed my knowledge. I returned to the doctor.

Our Story of Down Syndrome: The Short Version

For the first 21 years or so of Marcus’ life,

“Down syndrome” didn’t really come up,

and I kept our privacy setting as restricted. Not that I was hiding, I just wasn’t sharing. Why? Well, one reason is because most of those years were pretty, how shall I say this?

Not to me, you understand. But to an outsider. Seriously. What exactly is so exciting about going to work and going to school and living in Middle America? Not the stuff of reality TV programming. And I was

Come So Far And Yet 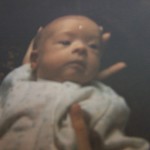 Just less than thirty years ago, I was handed a book written for parents of a new baby with Down syndrome that began with, “Do not put your baby in an institution.” Literally, this was the first line of the book.

Still, a social worker asked if we were “taking the baby home.”

Today I know women who coach doctors and nurses about how to share information about possible, potential, and available, instead of “put away.”

Be Beautiful, Be Yourself

Last weekend Marcus and I attended an

Some of the Marcus Equation

When you have a child with an intellectual disability the tests come early and often. Medical tests, intervention tests, IQ tests.

IQ tests are the worst.  On the parents.  I’ll never forget Marcus’ first IQ test, he was three. He communicated mostly with action/expression and sign language. But not that day, well I take it back. He was clearly communicating, just not compliant. An important differentiation that, as his mother, I could see but the Ph.D. in the room clearly could not, Or did not.

One moment that stood out, the psychiatrist held before Marcus a doll with its head off, laying