The Flower and This January

Super short version, here’s a text from a few days ago from me to my husband, from the emergency room, where I sat with my mom: 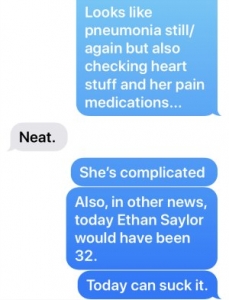 That was on January 9th.

Ethan Saylor died at the hands of three off-duty sheriffs a few days after his birthday. January 12th, 2013. January will never be whole again for his mother, Patti, and all who loved him. As our broken world moves on, there is so much work to be done.

I never knew Ethan. The first time I wrote about his death I referenced his given name, Robert, in “Robert Saylor Tragedy and Us.”  I’ve written much (much) since then, one of the most important was this: What We’ve Lost Since Ethan Saylor’s Death.

This Time Two Years Ago 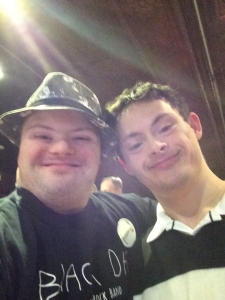 Marcus took this selfie of Mike and him at the Ethan Saylor Film Festival, January 2017

Two years ago, we celebrated Ethan’s life and the talents of people with Down syndrome via The Ethan Saylor Memorial Film Festival. My friend Stephanie Holland determined we would “take back” the theater and movie experience by showcasing films that were written, directed, and/or featured a person with Down syndrome.

Black Day: The Monster Rock Band showed, of course! As did a few others we’ve shared here, like “Celeste” and “Learning to Drive.”

Join us in watching and celebrating this short film written and directed by Michael McNally, a young man with Down syndrome who also happens to be from Omaha and an old friend of Marcus. (What can I say? We know cool people.)

The Flower – A Short Film by Mike McNally from The Silver Screen on Vimeo.

I guess my point (other than that this January can suck it) is, well…even when January sucks, there is still beauty somewhere. There are stories to be told. There are people to love and people to miss. Sometimes there are miracles that grow from love. Not everytime, but sometimes.

Throw in with your own January thoughts via Finding Ninee and the FTSF crew here.

Sometimes there are miracles that grow from love. Check out this short film *The Flower* to help through this broken world and effing January Click To Tweet
Mardra2019-01-11T18:25:19-06:00Categories: Grown Ups & Downs|Tags: Advocate Stories, art, Ethan Saylor Memorial Film Festival, storytelling, The Flower|4 Comments