I could dig back into the notebooks. There are so many notebooks. Most writing sessions begin with Marcus rubbing his hands in anticipation and exclaiming; “It’s time!” Then he’s off – dialogue, characters, and action coming fast and furiously. Me trying to transcribe his words at a speed that makes the writing barely distinguishable. If he stopped for a moment, I may ask a prodding question, prompt what’s next?

Like many storytellers, the initial burst of characters and spark of ideas propel the story into existence. After that spark, deeper questions come into effect. The components that make a good and complete story. Marcus and I decipher key elements of all of our favorite shows, books, even songs. We look at these pillars: Set, Adventure, Conflict, Jokes, and Truth.

He’s not only the creator of stories, he directs me on much of the marketing and merchandising, too. At one of our early book tour stops, we had a table at a toy-store and he sat with his books near the front door. I hovered in an aisle nearby. Marcus showed his book, Black Day: The Monster Rock Band, to the woman entering. She asked, “Oh! Did your mom write that book?” I have rarely seen Marcus with the incredulous look that flashed across his face.

“No.” He paused for that one beat longer than a stranger expects… “I wrote this book.” 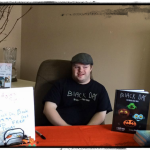 That moment. I hold close that moment of assertion, of salesmanship, of his ownership of everything that is his. I may soon forget the date, but forever I will hold under my skin the sound of the rain that poured down just outside the doors. The shaking of umbrellas from the customers rushing in, and Marcus stopping children and adults alike to introduce his book. The hollow feeling in my stomach that comes with the nervousness of exposing Marcus to strangers, to possible reactions beyond of my control, to hurtful misunderstandings, and yet, on this day, there was instead: The look of delight on a mother’s face when her son hovered over the book, turning the pages, the first book, she told me, that he ever wanted to read.

The parents who came in with their new baby, a baby with Down syndrome, like Marcus. Their eyes glistened at newly revealed possibility. Real life possibility, sitting here showing them a new story. A true story. Wrapped up in a book about a boy that wants to be in the band…

I can’t remember exactly when Marcus began imagining Black Day, it was at least one year before my husband suggested we publish one of Marcus’ many stories into a children’s book. (Of Course!) So, Marcus and I decided the first story to pursue to completion was his idea about a monster rock band. Marcus’ writing process is explosive and tangential. We worked together to mind-map the characters and then he took the next several weeks to compose the plot, with me asking from time to time, what’s next?

Although I was midwife to the creation of Black Day from nearly the beginning, I have learned more about Marcus’ inner ideas relating to this story since the book came out then I knew while he created it.

A few reasons for this. 1) It’s such a fun storyline that I didn’t focus on any deeper themes and simply enjoyed, no actually, reveled in the story itself. 2) The Mom-Me selfishly wanted to show-off to the world my son’s awesome ideas. The mom-me had serious brag tunnel vision. 3) Also, to be fair, the Truths have also evolved in Marcus’ mind, since the book published.

For example, in an early interview about Black Day, he was asked how important it was as an author with Down syndrome that he published a book. Did he see himself as a role model for other people with Ds? He responded: “My syndrome is fine.” Then he literally shook his head and threw his hands out – “Down syndrome doesn’t have anything to do with the book.”

Marcus’ discovery of that curious truth about stories—that they sometimes include things that they aren’t even “about”—is noteworthy.

We live in a society that puts a lot of attention on labels and can-nots. Our family chooses to focus on the cans. What can we do? Then let’s. We do not deny facing tough conflicts, sometimes villains, and universal evils.

When it comes to the evolution of the Truths in Black Day, in our initial discussions, Marcus said that the truth was, “Do what you want.” Brad, the main protagonist, is on a mission to be in the band and pursues it with determination.

At events, I ask Marcus, “Is it always easy to do what you want?”

Recently he has explained the Truth of Black Day is, “Be who you are.”

Both of these are themes of which he is living proof. Ultimately, Marcus is a storyteller and no other label  will ever be a greater Truth.