Toasting to Lives that Matter 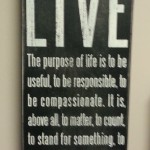 The purpose of life is to be useful, to be responsible, to be compassionate. It is, above all, to matter, to count, to stand for something, to have made some difference.

What do you think?

The purpose of life it to be useful, to be responsible, to be compassionate. Do these characteristics coordinate? Useful and responsible are relative terms and relate, again, to whom?  On a spiritual level, there are some who believe that every person by the sheer merit of their existence is used as part of God’s, or the Universe’s, or Fate’s, plan or purpose.

As I write this, a Les Miserable medley begins playing (Thank you Pandora) and let’s think about the second point, to be responsible. Again, to and for whom? After all, the great antagonist of Les Mis – Javert – was nothing if not responsible. And certainly he strove to be useful. But compassionate? Ah, that is where he broke. Right? 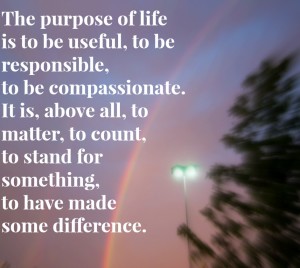 When considering usefulness and responsibility, the knee-jerk reaction leads to how productive a person is. Productivity = responsibility. And, as you may recall, my friend Kelly shared her thoughts on the subjectability of the endeavor of being a *Productive member of society*. So there’s the trick then, the coordination of useful, responsible and compassionate.

To Matter. To Count. To Stand for Something.

Really though, I believe the real truth of living a life of value comes more from the second sentiment: to matter, to count, to stand for something, to have made some difference. What strikes me is all of those descriptions depend upon another living being accepting and recognizing this. So, when does a life matter?

When does a life count?

Whenever someone loves another. Period. Katie Marie died the day she was born and her life mattered. Meghan Lee died before her mother could even hold her, but she was loved, and so her life mattered. In my humble opinion, any life that touches another, counts.

And then there are those who stand for something. Especially those who stand for something just by living a life on purpose, by striving to do what is right because it is right. Even if that’s just…living. Take for example Jack Hoffman. Jack stands for courage. He stands for pursuit of dreams. He stands for the value of teamwork, no – that’s not saying it well enough. He stands for the No-one-can-fight-to-win-alone-work.  Does he try to stand for these values? Um, well – he certainly didn’t ask to exemplify them, however he and his family fight for his life and the value of that fight and have consequently stumbled into a spotlight that shines upon all of this and more.

Yes, Jack has always counted to his family. Then to friends. Then professionals. Then to a football team. Then to the Husker-Nation. Then to the nation. Yes. Jack counts, stands for something, is making a difference. As do those who love him, and out it ripples…

The Legacy of Ethan Saylor

And after a person is gone, it is all of this that makes a legacy. Today we are celebrating the legacy of Ethan Saylor. Here’s a bit I found written by Patti Saylor where she reflected upon a mother’s day a few years ago:

“Ethan burst into his best shower voice and serenaded us all for the next 20 minutes. Ethan was a praying man. He talked regularly to the Lord and on this day he took this time to make his prayers for my health be heard. He sang his prayers to God (and the entire 2nd floor cardiac wing), “Please have mercy on my mom’s soul and please don’t let my mom to die, cuz I love her so much.”

His young staffer and I couldn’t stop laughing… yet tears filled my eyes as I witnessed his innocence, his sweet love for me and his life with me. He was completely at home in the hospital of his birth singing to God in the shower. He finally emerged from the bathroom with a grin from ear to ear.”

Today, would have been his 27th birthday.  Marcus’ favorite celebratory beverage is sparkling juice – so today we bring out the glasses and at the wish of Patti Saylor, we raise a toast.

*Here’s to Ethan Saylor, a man who loved and was loved.
He lived a life that mattered.
A person who counted in his community and beyond.
He stood up for his rights.
He is missed.
At your lead, Ethan, today I will not dwell in fear but instead, sing in the shower.* 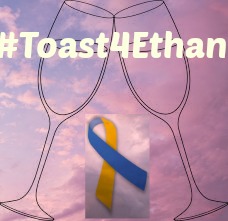 #Toast4Ethan Today, January 9th and on.

Share with us your stories of purpose, of lives that matter…