In 7th grade, I prepared my first, “front of class” speech. My topic: laughter. Why do we laugh? More than just funny, sometimes out of nervousness, fear, and breaking tension. I included some cheesy, cheesy jokes, to…you know…break the ice.

I’m told that my father’s family once said to my mother, “The problem with your family is you judge happiness by laughter.” I’ve reflected on both what’s true, and maybe not so bad, about this perspective. I should write a post about that…later.

I recently wrote, “LEARNING TO CELEBRATE LOVE” I put a lot of thought into it (more than the 5 minutes stressing me out right now*) ANYway, in it I reflect on how we (as society) teach our children to hate/fear, so do we teach love (or not). And that love takes both practice and work, which is not a bad thing. If you like to think and chat about these things, take another minute and read that one here. Then come back and think about this: is this true with laughter as well? I think maybe so. People have to be taught about laughter, about the kind of jokes that make us feel warm and full. People are perhaps taught how to nurture and keep laughter in their homes, at work, as a priority in their world.

I want to tell you about a show I’ve recently discovered that I’m really enjoying. It’s called “Up-Start Crow”(That link is so that you can check it out. It is an affiliate link, likely, which apparently, is important for you to know. However, it’s so you can see the image, most of you won’t actually be able to purchase that because of format.) ANYWAY – it’s about Shakespeare, kind of, told in a clever way that’s more about modern commentary than the 16th century. I watch it on BritBox which I subscribed to when I canceled Netflix because of their decision to not only produce, but promote and favor, a decidedly UnFunny person, show, and hateful spew of stand-up excuse-for-comedy. 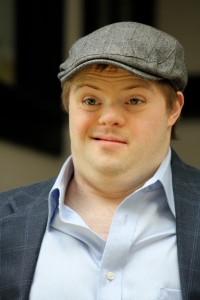 I have passed 5 minutes. And I have one more thing!

Talk about laughter…for example, we were at LGA (airport) recently and my chest was being, what’s the word? I can only think “felt up,” by a security person. Marcus is standing however many paces away – throws out his arms – shakes his head and mouths…”Awkward….!”  I know, right? He incorporates cultural references into the laugh-making-machine that is his brain seamlessly, this is why he should be a writer for Disney’s Muppets or the Simpsons team. (If you know someone who knows someone, please, get this guy hooked up! The world will Thank You!)

This week is World Down Syndrome Day and I wish I had the wherewithal to talk about the amount of laughter that is in our house every day. The stressors and suffering in my life do not come from or surround my son, who has Down syndrome. Yes- I have big fears and, if you’ve read anything else I’ve written, worries.

But today…Today there is laughter and I guess part of why I worry is because I love what we have so much. I don’t want it to end.

NOW – This video is a little dated, but a good example of how we practice laughter in the Sikora House.

If you have trouble with the accent, click “CC”

If you want to include more of these snippets in your life, apparently you can “subscribe to our channel” Who knew? Or you can like our Facebook Page where I am inclined to share a video spontaneously, now and then.

*SOOOOOooooooo, this topic of “Laughter” was prompted by our friends at Finish the Sentence Friday with the challenge of a 5-minute prompt. In the words of Monty Python, “That was never 5 minutes just there.” Which is true. It was more than five, but how much more I don’t know because I forgot to hit “start” on the timer. Not too much more…and on I ramble. Thanks, Friends, Laugh On! (You still have a day or so to join in on this #BlogHop and talk about Laughter, too,)