Highlights from our trip

Highlights from our travel journal:

As many good vacations do, this one began on a Friday morning at what Marcus calls “Dark early.”

“I hate dark early!” he said. Don’t we all?  Getting up at 4:00 am (after getting settled at about midnight, everything sneaks up on you, you know?) To hurry up and wait and hurry up and wait. Short flight #1, short layover, on to flight number two – Yea! Marcus decided Mimosa was the way to fly and I agreed. Cheers! 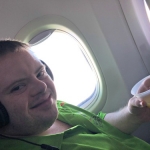 Marcus holding a mimosa on the 2nd plane. Cheers!

Only two more planes to go…

When we reached our layover in Iceland, Marcus taught me just how to deal with…humans. What Marcus Taught me in Iceland.

When we arrived in Edinburgh Saturday morning. We rested, we set up hotel-house, we ate, we went on tours, visited castles and pubs. We crammed a lot of food and new adventures into two 1/2 days.

Then Tuesday we headed to Glasgow for the World Down Syndrome Congress.

Marcus joined many other adults with Down syndrome at “The Gathering” named this in homage to the tribal Scottish gatherings of year’s past.  He was nervous, I was nervous, but we both did the thing. Me with coffee (and a smidge of self-medication within) and he with, well jumping in and enjoying.

Wednesday morning Marcus was part of the flag ceremony. There were people from 95 countries at this event. WOW! 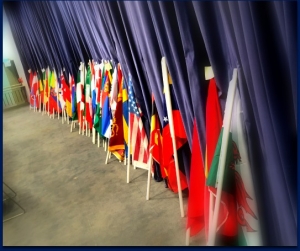 The key sessions I’m going to delve into more and share notes with you are: 1) Self-Advocates and Human Rights. 2) Speaking up! (Featuring Black Day: The Monster Rock Band) 3) Mental Health and Sleep, particularly in people with Down Syndrome.

Where we filled our well the most, however, was the social events where we met people from Canada, England, Wales, Scotland, South Africa, Equador, Australia, Korea, Hong Kong, The US, and Latvia. We also met folks from even more nations, in passing and in classes. Amazingness.

On Wednesday night the social event was at the Glasgow Science Center, which Marcus really enjoyed lots of “cool stuff.” We also met Caroline from Wales and this is possibly my favorite picture from the whole trip. 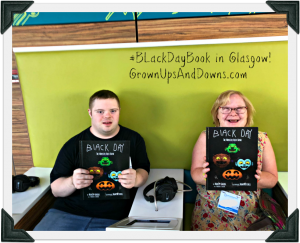 On Thursday night there was dinner (Yes, including haggis) and Scottish dancing. Quinn said that when the dancers flocked to the floor to join in the traditional dances, he felt as if we were all one village. The feeling of one, joyful unit really overtook the room.

On Friday night, more new friends and conversations and then “disco”, as the UK call it, which meant the dance floor was filled the moment the DJ started song number one. Some things are true the world over. 🙂

Saturday Quinn headed home and Marcus and I went on to London. This Broadway boy was ready to experience London’s West End. To get there we took a train, of course!

Short Video of our train trip to London

What did we see? Harry Potter and the Cursed Child, Parts One and Two. And on Monday night we saw Les Miserable. Both: A-Mazing. I will tell you more about those, and how HPTCC led to a storytelling pillar epiphany that Marcus and I will be adding to our storytelling analysis and lessons. 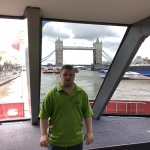 It wasn’t all theatre!

We took a boat tour on the Thames to see the iconic London landmarks. And we completely missed buying any postcards or doing any shipping, really. Ah well, we can order those later, I guess.

Overall, I’m thrilled we made this trip and even actually a little surprised we did. Next up? Oh Lordy, some rest, some catching up, lots of work to do! Stay tuned as I fill in the links on all the deeper details we hope to share.

Thanks for stopping by, feel free to leave a note or  for emailed updates, not too frequently, Join the Club Here