A Life Uncontained (And baseball memories with Video)

Today we reminisce about a few of my favorite Marcus-centric baseball experiences. First, when he was small.

As you know, I don’t often remember Marcus’ exact age with most memories, so…sometime after starting elementary school, not so clear verbally, and, like I said, small. I don’t recall if it was the local baseball team or the College World Series, all I remember is it was hot, there were hot dogs, and we were getting a little antsy with the game because we don’t really know baseball. However, there was one ritual that particularly amused Marcus: the booing.

One of the booing/giggling times Marcus looked at us and followed with, “Moo! Cow!” Which created a burst of laughter from Quinn and I at the realization that Marcus (having never been exposed to “boo-ing” before) decided the crowd was Moo-ing, spontaneously. And let’s face it, that is funny. Thousands of supposed grownups all mooing together – what a hoot!

Three years ago Marcus threw the opening pitch at our local baseball field. I think he nailed it. It was a fun game with other DSA families. I also got “locked out” of Facebook that day for sharing too many photos, I guess…? I don’t know, actually, but here’s the video Facebook made anyway.

The Night Game of a Big Day 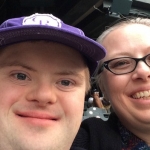 Then there was the time Marcus and I went to a Colorado Rockies game on the day of his photo shoot with Carlos González. This is (essentially) what I wrote in 2016 for the HuffPost on the morning after Marcus’ first professional photo shoot and our night at a Rockies Baseball game. I feel this way today as much as ever.

We weren’t dressed for a baseball game, but when CarGo gives you tickets to “tonight’s Rockies game,” you go. Marcus wore a Black Day t-shirt, a suit jacket, and a Colorado Rockies hat. Me in a hodgepodge of dress shirt, woolen vest, and a long, not-really-matching, sweater. The sun disappeared behind the mountains and the bright field lights kicked in. People around us asked, “Aren’t you cold?” Surprisingly, we weren’t. Chilly, but not cold. Personally, I felt alive and awake.

I thought back to twenty-six years ago, the time of his birth, when Marcus was diagnosed with Down syndrome. From that moment on, there have been labels proclaimed and pasted upon him. Labels that, at times, covered the best parts of him. There were, and are, people who only see those labels then put him in a box. A box where he “belongs” in order to fit into the space they want to allot him. A box to keep chances out. A box to contain.

The thing about Marcus is: he doesn’t fit into their box.

Down syndrome is the scientific descriptor of the fact that every cell in his body carries 3 of the 21st chromosome. In fact, I’ve heard Marcus say, “I am Down syndrome” and it is a verb misplacement that I am not quick to “correct.” These are his words. I cannot deny him. The labels I speak of are limitations that have come from outside of him, sometimes from professionals, sometimes from strangers, even on occasion those close to him. Labels that diminish his whole self, so I am proud that he chooses to own who he is while denying forced labels.

There were, and are, people who only see labels and put him in a box. A box where he “belongs” to fit in the space *they* want to him. A box to contain. The thing about Marcus is: he doesn’t fit into their box. Click To Tweet

I admit there are times that curling up into the box assigned by society looks…easier. I expect the box may actually be safer, sometimes. The box moves when repositioned by outside forces or is left in its space: contained.

However, to me, a full life means a life uncontained.

An uncontained life starts with taking chances. While Marcus and I sat at the baseball game, I considered how, no matter what position on the team, every player gets a chance at bat. Let me repeat that:

Every player gets a chance at bat.

(Takes in deep breath, then goes back to baseball.)

That moment must be both incredibly terrifying and also exhilarating.

Have you ever hit a home-run? The ball, your obstacle, comes at you with the full intention of provoking a miss, strikeout, or foul – also it comes at you with frightening speed. Yet, there you stand, with only one visible tool, and then you swing.

This sounds to me like the ultimate uncontained experience.

I witnessed Marcus hit his own home-run earlier that day. Marcus was partnered with CarGo, (Carlos González) outfielder of the Colorado Rockies, to appear on the cover of Down Syndrome World magazine.

I’ve seen Marcus hit home-runs before, with his book and animated short, Black Day: The Monster Rock Band, with his book tour teaching moments, and sometimes when he says the perfectly right thing, at the right time, to the right person who needed to hear it. (Often, that person is me.)

Do you think it’s possible to get used to hitting home-runs? I doubt it.

Another thing about a home-run is, sometimes, it moves other players as well. Your teammates are given the momentum, the direction, and the freedom to go for it! And go – they all do. I’ve learned from parents and educators how Marcus’ home run(s) help them to see, to run, to do. I’m thankful his voice makes a difference to their perspective, to their homes, and their communities.

Marcus and our family has moved forward because of the home-runs of so many others, Chris Burke, Jamie Brewer, Connor Long, Frank Stephens…to name only a very, very few. I could go on and on and on.

Carlos González has hit 180 baseball home-runs in his professional career. As I watched him introduce Marcus to his wife, or when he took Marcus around the shoulder, or when they looked at Marcus’ book together for the minutes longer than necessary for a photo op…I observed his interactions with Marcus transform from appointment to ally. 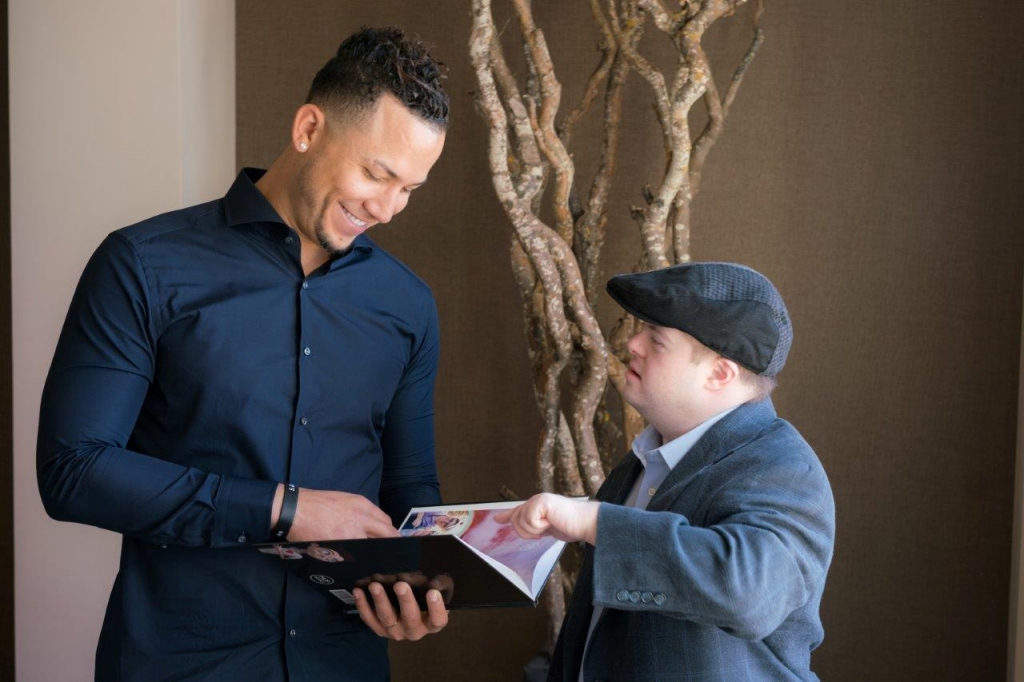 I witnessed Marcus’ interactions grow from anxious to advocate. I know very little about Mr. González, but I have no doubt that he too, has had to fight the injustice of other’s labelling him and trying to keep him contained. This was an appropriate pairing, together they broke from labels and strive for the next home-run; living uncontained.

Check out this video of the photo shoot:

FYI: Down Syndrome World Magazine is issued quarterly to members. It’s only $20 per year and brings other perks from Global as well. Start here to become a member.  In fact, once you are member, you also have access electronically to previous issues, like the one with the feature: “The Slugger and the Storyteller.” 🙂 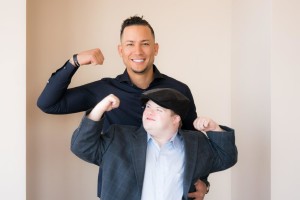 The Global Down Syndrome Foundation  works to improve the lives of people with Ds via research and improved medical care. Global is doing groundbreaking research in the areas that most often affect people with Ds. The funds raised directly benefit people with Down syndrome today and also for their futures while pitching for a world where every person with Down syndrome gets his best chance at bat, celebrating home-runs, and experiencing a lifetime uncontained.

I’m reminiscing today because later this week I plan to join some business colleagues at a White Sox baseball game, it got me thinking about our few, yet powerful, baseball experiences. The White Sox will be playing the Red Sox by the way, and I think that’s funny. Thanks for stopping by on this little baseball-centric memory lane, feel free to leave a note or for emailed updates, not too frequently, Join the Club Here

Now, tell us about your home run(s)!