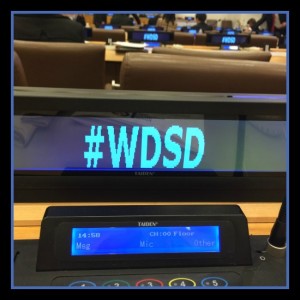 For you other geeks out there, I will now share about our #WDSD experience. For those of you who stick with me, there is an extra special treat at the end, the nugget Marcus shared with me at the end of the day.

From Webcam to Being There

For the previous 4 years, I have watched the United Nations celebrate World Down Syndrome Day via live webcam.  The first year I watched it was the first year it launched and before I was, how shall I say this? Not vocal, outside of our own world. I did not have a blog, I was writing essays and fiction – but not yet publishing. ANYway, the point is, I don’t really know how I “found” the WDSD website and the UN webcam, but I did, and it ROCKED MY WORLD. I sat and soaked up so much information new to me about Down syndrome, the experts, the advocates, and the best part, of course, was seeing self-advocates speak from around the globe. Amazing. I was hooked.

3-21 became a holiday to me. A learning, teaching, and celebrating holiday. 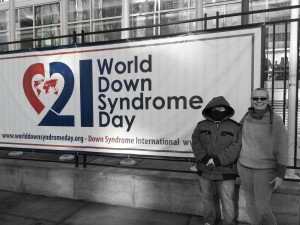 This year we celebrated in NYC. At the UN.

With lovely people from around the world. Sooooo much learned, people met, I listened…almost too much for words, but I will try.

In years past I have live tweeted the #WDSD16 from webcam. Today…we are here! Squeeee

Ok, starting with my one critical note, there’s this: This year’s theme “My Friends, My Community: The benefits of inclusive environments for today’s children and tomorrow’s adults.” It so often feels like our advocacy groups, educators, and on focus inordinately about tomorrow’s adults, when today’s adults are often isolated, in the US much more than the kids. And, ironically there are WAY MORE ADULTS WITH DS THAN KIDS. Sorry, did I shout that?

Alright, I got that off my chest. It’s all about the steps, each step, I get it.

The morning began with Ambassadors from around the world speaking to the issues that people with Ds and their families face, about opportunities, and about concerns for health and well-being. I tried to get a few tweets out here and there. This quote came from H.E. Mr. Motohide Yoshikawa:

“Greatest expression of love is setting her daughter on her own feet” re: mother of daughter with Ds #WDSD16 true for all parents, yes? — Mardra Sikora (@MardraSikora) March 21, 2016

These thoughts were paraphrased from the mother of Shoko Kanazawa, a young woman advocate and artist from Japan who spoke at last year’s event: (SO beautiful, I cried watching her video last year. Just gorgeous.)

I appreciated the sentiment of the UK Ambassador H.E. Mr. Martin Shearman who said, “I encourage you to bring this back to the UN, to be sure they are making progress.” He referenced the UN commitment to all members of the human family. I like that phrase, the human family.

Then we heard from the president of the Down Syndrome International, Dr. Surekha Ramachandran. I got to listen to Dr. Ramachandran last year live, online via the 321 eConference. I felt honored to be in the same room with her. I swear, just hearing her as she pointed to the difficulties and the “long journey ahead” to creating societies where people with Ds are not only In the community but Of the community really impacted me, “Right in the feels” as the young people are prone to say.

Dr. Ramachandran used the phrase, a “receptive society.” Then noted that, “Fundamental positive change in attitude from around the world is required.” Yup. She also noted that evidence has shown time and over again that “The cost of exclusion is always much higher.”

Then followed my favorite part, when we heard from self-advocates. The first was from Poland. Joanna Hajduk took the microphone. She spoke her speech then would break for her translator. I shared one video:

Posted by The Parent’s Guide to Down Syndrome on Monday, March 21, 2016

I tried to catch,  but it doesn’t do justice to the way she beamed at the end of each of her segments. I don’t speak Polish, but I do know pride when I see it. Well deserved, Joanna. Thank you.

We heard from Aleksandar Matowski, a self-advocate, poet, student, and more from the Republic of Macedonia.

Antoine Fontenit, from France, told us, “I have Down syndrome and I want my rights to be recognized.” Adding, and including, “I have the right to decide about my own life.” He also pointed out that, “I believe that each one of us can help others.” Then he urged teachers and employers, “To trust us. It pushes us to learn.”

The last self-advocate to speak on a panel was Anna Rose Rubright. (You would maybe have recognized her from this year’s video event, “How do you see me.”) She gave evidence of the importance of advocacy for herself and others, and she talked about working hard, making change, and seeing the goal. I appreciated this quote, “I am hard working. I love to contribute, but many employers see my extra chromosome before my work ethic.”

These notes are brief compared to a day’s worth of information. The good news is this – You can watch all of this! The WDSD Conference website has 2 videos, the morning and the afternoon session, for everyone!  https://worlddownsyndromeday.org/wdsd-conference

I have three more gigantic takeaways that impacted me.

1) One of the speakers used the phrase, “The dignity of risk.” Oh snap. Now it’s personal. Right at that moment I felt the finger of the universe pointing at me, “Come on, Momma, you’re going to have to take some steps together, sure, but you’re also gonna have to loosen that grip a bit…”

But it’s harrrrrrdddd, I said.

and like any good argument, I have played it over and over in my mind.

The beautiful woman who took the time to chat with Marcus and I about her work in Malawi. Where children are hidden from the public eye and parents so often believe that having a child “like this” is a punishment from God, for what?  She has so much love and hope and faith in the simple fact that every child can learn and every person deserves to be loved, and she works against the tide every day. We gave her a copy of Black Day to take home and show the children and families about possibility.

Can you even imagine? I’m a little weepy thinking about it.

Of course, that is only one of the many – many – many nations and cultures that still…Oh.

And yet, the world is also so small.

We met old-new friends. Thank you to our Hayley in the UK, we met Catia and her daughter Laura from Australia, and we pretty much “Closed the UN” – you know, the last ones out of the room and then the building. We got to spend some other lovely times together including making a new friend from Italy, too! So GREAT!

#WDSD16 brought us together with New Old Friends. What a big small world. #DsWorld Click To Tweet

The Best One, Of Course

3) What Marcus had to say. OK kids, you’ve held on this far, good work, because now I will give you the best treat of all. We get to learn, yet again, from Marcus’ perspective.

If you can’t tell from this so far, it was a long day. It was talking heads from morning until late afternoon. We did sneak out a little early for lunch and walked the premises a little to keep our blood pumping. I plied him with caffeine as much as he would accept, having made the decision to cut down on pop.

People talked and talked and talked all day long. Plus, it wasn’t all good, ya know. There are problems and science and culture and, well, some of it was hard to hear. It was hard for me, I can only imagine what Marcus thinks and feels when bombarded with all of this circling around the words “Down syndrome.”

Then, at the very end of the day, as it all wrapped up, he told me.

After last speaker finished up,  Marcus turned to me and said these words:

“The problem is awesome.”

I repeated it, to make sure I heard him correctly.

I took a deep breath. I’ll let you sit with his wisdom, perfectly summed up, as only he can and does.