Last Thursday Marcus and I went to our state capitol building and testified in support of LB891: The Down Syndrome Diagnosis Information & Support Act.

I’d like to ramble to you a minute about my own state of mind and lucky coincidences, then I will share what Marcus and I each shared as testimony. If you just want the testimony – check out the “short version” here. 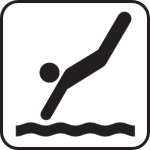 Come on in- The Water’s Fine!

Ya know how a swimming pool or lake can be really cold when you first jump in? Or maybe to you it was cold but to someone else it was perfect? Then, as you swim a bit you realize the water is fine. (Fine! Right Stephanie?) Well, this is a little bit of what I think of when people who don’t know or care about anyone with a developmental disability meet an adult with a disability. It can be a shock to them. They haven’t felt this connection warm their systems, yet. They don’t yet know that it’s fine.

Sometimes people jump right out from the water thinking those other people are doing something terribly uncomfortable, maybe even intolerable. This shock, I think, can create a higher cliff, a scarier ledge, between fear and understanding.

Am I coming through? SO, yes, the fear portion from the “We don’t live fearless” post was mine, not as a speaker but as a parent. I don’t suppose that will ever go away, with each new opportunity for the world to meet Marcus. With each new opportunity for my bubble to allow in, at best – opinions and, at worst – hate, from the men and women who walk this planet who do not value the lives of others who are different than their own, I am more afraid. (sigh)

OK. So, enough about that. Next up: the lucky visual.

The day before the testimony I happened to turn on the TV and happened to turn to the live NETV channel that was showing a committee hearing. So I called Marcus down and could point to him (and me): “This is what the room will look like.” “This is where the Senators will sit.”and, “This is the table where you will sit to give your testimony.” Pretty Cool! Great to have a better idea what we were walking into.

We had already written his testimony, and he had been talking it over a few times. We were in the car, early for an appointment, and I said – “Why don’t we practice?” He did a few for real. Then he decided to do his testimony as Elmur Fudd, as Tigger, as a friend or two, as President Obama, and as Homer Simpson. Those of you who are regular followers know that my video skills are…lacking. That said, I am going to share Homer Simpson’s testimony at the end of this post. You know, a little reward for you all.

Here is the copy of the testimony he gave:

My name is Marcus Sikora. I wrote a book called Black Day: The Monster Rock Band.

It will help parents and people with Down syndrome.

He had a few hiccups, but followed by holding up his book. One senator asked, “Is that your favorite book?”

Which he replied. “Yes.” This is true, also, if anyone asks his favorite book he will answer “Black Day.” It’s good to get behind your own work. However, I was afraid that she/they didn’t understand this was his book. So I (sitting in the first row right behind the “testimony table”) clarified, “He wrote this book.”

He confirmed, “I wrote the book. I’m a storyteller.”

Then he pointed out, and I clarified for him, his “favorite blond” of the Senators seated before him. She was prompted to ask where he got the idea for his story and he told them “In a cabin.”

Marcus was the third of the self-advocates to testify. A young woman who is a sophomore in High School and a young man who went to the University of Iowa also testified. Plus there were a few others in the audience of variable ages.

It occurs to me, I haven’t actually said what this legislation is/is-for.

This legislation would make available to expectant and new parents, upon receiving a diagnosis of Trisomy 21 (or Down syndrome) from their health care facility or practitioner, educational and supportive information provided by the Nebraska Department of Health and Human Services in conjunction with local and national advocacy organizations.

The link to the Nebraska summary, and what organizations are supporting it, is HERE.  The actual bill 891 via the Nebraska State Legislature is HERE.

The reigning experts on diagnosis information are Mark Leach, via DownSyndromePrenatalTesting.com, the Down Syndrome Diagnosis Network, and Lettercase.org. While these are all Google friendly sites, unless you know the words to put into the search box, a new or expectant parent may not stumble across these. Truthfully, I live in hope that The Parent’s Guide to Down Syndrome will rise to the top of any Google search as well, but I’ve got a lot of work to do before the interwebs lead new parents to this resource.

A little more about the day

We were one of several folks to testify. Most were either self-advcocates or people affiliated with a local organization. After a person’s testimony, sometimes the senators asked more questions. (Which was great, I feel.)

I’m going to divert from the chronological again and mention that this proposal was the fourth item on the day’s agenda. The senate committee commenced at 1:00, began with a DHHS department specific summary, there were two other bills brought forward with testimonies and then the Down Syndrome Diagnosis Information & Support Act followed as the fourth (and final) point of order. The senators were attentive and respectful to every person’s opinion.

One thing I noticed from sitting through the day was the emphasis placed in various contexts on how many other states have passed a bill. I’m not sure what weight this carries, but I noticed it came up frequently, so I added it to my notes. Also, during the Q & A, early on was the question, “Won’t there be a national mandate for this, eventually?” Inferring, should we even mess with this? and also, “Isn’t this information already easily accessible via Google and every parent’s Smartphones” (I’m paraphrasing these from memory, by the way)

The second point – regarding Google – was brought up as not the best resource, actually…by many of the parents who testified before me with their own diagnosis experiences that included this process.

About the national legislation – ACK! I know the answer to this exists. I went to an online 321eLearning session by Mark Leach a few years ago that discussed this legislation. What is it called???? With my phone I searched  and made a note or two to add to my testimony.

Still with me? Here we go:

My name is Mardra Sikora, my son was born in Kearny, NE, a quick 25 years ago.

The day after he was born a social worker approached his father in the hospital hallway – while I held my newborn with his tiny fingers curled around mine, she asked we would be “taking the baby home.” Before I had a chance to get to know my child at all, let alone the implications of Down syndrome, the first provided option was to walk away from my own child.

Today you have heard plenty of birth stories more recent than ours that show the gap in quality and helpful information given to parents regarding Down syndrome. Obviously, this information needs to be concise and current and available to parents, prospective parents, and all of the professionals working with these parents. And while the parents are the first folks who need to have these details, I would like to stress that it is the child with Down syndrome whose life will most be affected.

It is true that children and adults with Down syndrome have certain medical and developmental challenges that need to be addressed and cared for. It is no surprise/secret that the changes in educational expectations, improvements in medical care, and simple social acceptance have all played a part in people with Ds better reaching their potential. They’ve been proving this to society via becoming TV and movie stars, getting married, going to college, or like Marcus, creating children’s story books.

However, there are segments of our community that are still not getting enough information and support that the families need to help their children thrive. I support this bill not only for the sake of the parents, but also for the sake of the many beautiful people living, newly born, and yet to be born with Down syndrome. I believe that by giving families quality information and support at the beginning of life will better equip those with Down syndrome to reach their potential. Then we, as a community, will experience the positive impact of having people with Down syndrome thriving in our communities.

Then I added, something like this because I’m working from memory and pencilled scribbles at the bottom of my page.

I’d like to also add two more notes to the senators. One is the question came up about a federal law. Yes. There actually is a federal law on the books about this already. It is called The Prenatally and Postnatally Diagnosed Conditions Awareness Act. As I understand it, it’s one of those laws that are passed as a good idea but there’s really no teeth to it. It is up to the states to actually make the law work. So really, today, we are asking you all to help bring this law into effect.

The second thing is that I’d like to point out that when Marcus was born Nebraska was one of only five states to offer early childhood education from birth. I was very proud to be in a state that appreciated the value of my son’s future with this, of committing to his potential.  It’s been pointed out today that there are 14 other states that have adopted this information act and I’d like to see Nebraska continue its commitment to being on the forefront.

Then the senators did ask a few questions and make comments. I’d like to point out that I was near the end of testimonies, so the fact they were even still listening was a, well, pleasant surprise.

Alright! DO I have any great pictures or video to document this day? Nah. You all know I suck at that – and Kelly couldn’t join us, so no good pictures.

Also, in my defense, the lights and power went out during the person after me (the second to last person to testify). No one showed up to give opposing testimony. If they had, they would have had to give it in the dark. Oh what a metaphor I could run with that!!!

ANYway, I took two pictures in the dark capitol after, but they didn’t really turn out. I took one outside the capitol building. Marcus is covering his mouth to protect himself from the wind. But he is giving a thumbs up, so, alright – just to prove we were there – here you go. 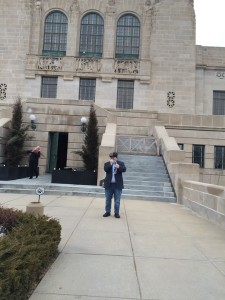 Do you have a Down Syndrome Information Act in your state? Do you want more information? About Nebraska or other – let me know and I’ll hook you up with people-in-the-know.

And lastly – here’s one of Marcus’ practice testimonies – this one he’s Homer Simpson.

Enjoy – You deserve it!

One more thing – for those of you haven’t already Joined The Club– follow use here for updates, not too frequently. See you Around!