What are the Odds -Sherry Palmer

Our next guest in the What Are the Odds game is another new friend who I clearly have so much in common with 1) We both have an adult son with Down syndrome. 2) We both had endometriosis, it sucked, we’ll leave it at that and 3) we both have 2 cats.

From there, well…the paths do diverge, now that I think of it. Sherry holds an MFA in creative writing from Spalding University. She works at the Halls Branch Library as an assistant for Knox County Library in Knoxville, Tennessee, where she lives with her husband Brad, (a preacher) & her son Charley.

Although we are very different, on paper, I love the story of her journey, I love the way she tells it, and I’m delighted we have virtually met. If you want to hear – literally hear, more about Life with Charley, check out this podcast. She graciously agreed to roll the dice and here we go! 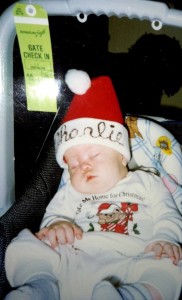 My lucky number is 14. That’s the day we adopted Charley. December 14, 1990. We had no idea how lucky we were, or what was coming our way…no foretelling of the ways he would change our lives forever. We rolled the dice and took our chances.

Blind faith drove us to the Social Worker’s office where we met the tiny person that would forever shape the way we would look at, the world…through a pair of crescent moon-shaped eyes; the eyes of Down syndrome. Here’s a picture of Charley on that day, when we brought our precious cargo home for the first time…

There is a community on Facebook called #smilesacrossthemiles that has reached out to Charley. We never know when a card will come in the mail with a cheery message, and pictures of other families with loved ones who have DS. It has been a Godsend. Seeing Charley open the mailbox, then running to the house and waving it in the air, is so much fun. These other families know how isolating it can be for our kids. If I could say anything About an unexpected surprise, it is that Facebook has provided us with unexpected blessings in the form of unexpected friendships. Here’s a picture of Charley with one of his cards… 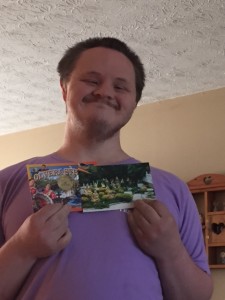 “Let me win, but if I cannot win, let me be brave in the attempt.” That is the official motto of the Special Olympics. There’s a chapter in my book titled 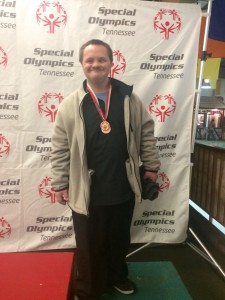 “Everyone’s Arena.” It’s about a place where everyone belongs. Where everyone is somebody. It’s called the Special Olympics, and every time Charley comes home, he wears a smile like no other. It’s a smile that says he’s been at the top of his game. And why? Because it’s an arena where he knows he’s a winner.

So often we see kids on the sidelines because they lack the ability or encouragement to compete. But at the Special Olympics, the only sideliners are those cheering for the participants. It’s an arena where everybody plays the game. Everybody wins in Everyone’s Arena. There’s a story about the Special Olympics on my blog. It begins with a game played by an African tribe that embodies the very essence of collective happiness. Here’s the link.

How many times do you get married to the same person? Some call it renewing your vows. We called it “I Re-wed.”

Look for the chapter in Life With Charley

Getting married again so your son can see it happen.

And if I might just say so, it’s double the fun. But then, so is Charley. Here’s a picture of the two loves of my life, the day we “Re-wed” -> 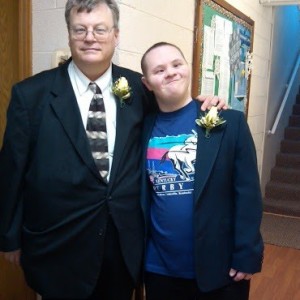 (6,5) From this one word prompt either write or send a picture reply: House wins

There comes a time when the house has to win. French fries. Soda cans. Petrified hot dogs. You name it, if it can be deposited in a place it should not be deposited in, Charley can find it.

Problem is; we can’t.

How are we supposed to find his shirt? His underwear? The jacket he hates but we insist that he wear because of the subzero temps outside. The button-down dress duds he plans to wear to the prom? The black jeans…yeah, the ones without the hole.

How are we to find that remote control that goes to the CD play he “bowwot” from church? Or his wallet?

How are we supposed to know where his CD is? Or that DVD he borrowed from the library. The one he’s been looking for, for who-knows-how-long? It’s us against him.

Like I said, the there comes a time when the house has to win. Don’t believe me? Here ya go… It’s all right here, in The Pledge

Sorry, no picture…use your imagination.

Sherry McCaulley Palmer has been a writer since she was able to hold a pen. Her stories have appeared in Chicken Soup for the Christian Family Soul (HCI, 2000) and I’m Glad I’m a Mom (Harvest House Publishers, 2008) as well as essays in “Down Syndrome Today Magazine,” and “Foliate Oak online Literary Magazine.” Her guest columns have appeared in The Breathitt County Voice, The Tennessee Star Journal, and Monroe Life magazine. You can contact Sherry on her blog Life with Charley. And on Facebook.

Hope you loved meeting Sherry and Charley and Family – Since this post I got to meet them all in real life and you can trust me, they are awesome. We picked up in the middle of the conversation and I wish it never had to end.