What Marcus Taught Me in Iceland

The Most Important Lesson from our Trip Happened in Iceland.

Can you imagine what it’s like to have your own child’s value, as a human being, debated? A world where you regularly encounter the opinion of scientists and doctors who are literally working to eliminate the entire segment of humanity of which your child is a part…and it all happens without public outrage. In fact, it is happening throughout entire cultures.

Iceland and Down Syndrome

Iceland has become a trigger word in the Down syndrome community.

In August of 2017, CBS News “On Assignment” reported the birth rates of people with Down syndrome are diminishing to nearly zero. The headline read: “’What kind of society do you want to live in?’: Inside the country where Down syndrome is disappearing”  the short version is this quote:

Since prenatal screening tests were introduced in Iceland in the early 2000s, the vast majority of women — close to 100 percent — who received a positive test for Down syndrome terminated their pregnancy.

For me, and many others who have been watching the birth rate trends around the world, this wasn’t new news. In 2013, I published the essay, Arguing Eugenics, it detailed the information of that time (which have already changed) and my arguments (which haven’t really changed). Since then, I’ve spoken on the concerns of eugenics and written words, words, words…As have many of my colleagues.

On the ethical and practical soapbox is Mark Leach. He’s been ringing the alarm bells for years and has shared the gathered statistics. Don’t take my word for it, go down the rabbit hole. I’ll wait.

I wrote “Arguing Eugenics,” about five years ago because a professor in Denmark claimed Denmark would be “Down Syndrome Free” by 2020. Since then, and with new science offering prenatal testing as early as ten weeks…the birth rate trend has continued to drop.

The fact is, Iceland recently got “called out” for the disappearance of live births of people with Down syndrome, but it’s not a unique situation.

“A survey of Down syndrome births in three regions globally: Western Europe, North America, and Australia, found that, overall, there are more abortions of children with Down syndrome than babies that are born.”

Today, all of these words are a thinly veiled justification for my own anxieties and preconceived notions about the people of Iceland. These first 500 words are simply to justify my confession to follow.

You see, on our recent visit to The World Down Syndrome Congress, we flew on the Icelandic airline, WOW and had a scheduled layover in Reykjavik.

Knowing all this, was it appropriate for me to be super nervous?

I was anxious when we boarded, I fidgeted while we flew, and each time we talked to the crew. Then, when it was time to deplane – well, here’s exactly what happened as taken from my travel journal:

July 21st, three planes in, we just landed in Iceland.  First off, I haven’t slept. So, bear that in mind.

While we taxied into the Reykjavik airport, I stewed. I thought these flight attendants seemed very “cold” to me on the flight. Not all out rude, efficient enough. But cold.

Is it because Marcus has Down syndrome? Are they making inappropriate judgments about him? Are they defensive about the “rap” that Iceland has on this issue? (Even though this is all of western Europe, really…?) I wanted to ask Quinn what he thought but decided to wait because I didn’t want to say this in front of Marcus. But I am stewing as we gather our things and leave the plane.

As I step by the flight attendant I mumble “Thank you” and she returned the obligatory tight smile. It’s a big step off the plane, and a little wet from the drizzling morning, so I took a minute to maneuver onto the walkway, carefully handled the step, then I turn to prepare Marcus and…where is he?

He’s still on the plane.

It was a real, good hug. She smiled after him. A real, good smile. Quinn and I helped Marcus down the step and move quickly through the jetway and I am blinking rapidly. Is there a lot of pollen in the Reykjavik airport, because I seem to have something in my eye…?

How does he know just what to do? Every. Time. 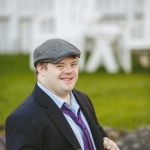 Oh, Dear World, one man cannot show you all, but my does he try.

Back to Of Monsters and Men, eh?

“I can see through you, we are the same…

“And I run from wolves…”

Take what you will…

BTW, when the “Iceland story broke out, I replied with this: “If You’re Worried About a World Without Down Syndrome, Read This and Share.”

Thanks for stopping by, feel free to leave a note or  for emailed updates, not too frequently, Join the Club Here

I’m sharing this again today to the “prompt” Acceptance. Everything about accepting people with disabilities, people who look a little like my son, accepting every human as valuable is crucial to the long-term health and safety of my son, and so many others whom I love.