When Marcus Rolls, Everybody Wins!

Marcus has been pretty stoked for this birthday. 25 has been his “number” all year. I’ve never known anyone more excited to be 25. As you may remember, it was pretty much the day after his 24th birthday that he decided to celebrate 25 in Vegas. Now, to be fair, he does have a unique point of reference as he has grandparents with a home in Vegas, so we’ve been before and celebrated birthdays here before. But this birthday, well, go big or go home people!

If you’ve ever gone to Vegas for a getaway, you know the trip begins at the airport before you leave your home town. The atmosphere is full of festive anticipation, the culmination of the concept that soon you will be able to let loose and let it go. Marcus was in the line to board, then scooted so close to the attendant calling the boarding numbers that the attendant turned the speaker phone up to Marcus to call the next numbers. Instead Marcus said, “It’s my birthday!” Cuing a gateful of cheers. That’s how the weekend began. Course it also began with lines and waiting and I was reminded by Marcus, in case I didn’t know, “I hate wait.”

Up Time & Down Time

From the moment a person arrives in Vegas, the sensory stimulation commences. So we are lucky (and thankful) to have a place to stay where we can fully rest before, and unwind and recharge after, the thick of the excitement, colors, and sounds of “The Strip.” 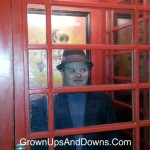 All You Need is Love

We had a full day Friday with travel and seeing the Cirque Show: Love. We also took a backstage tour to see how the “theater magic” works, costumes, light room, and background on the show. I think by the end of the show, although it is a 2000+ seater room, Marcus got a personal wave or acknowledgement from most of the cast. Marcus even took off his hat and bowed as the character of the Queen went off the stage passed our seats. (It’s all that Dr. Who and other BBC we watch rubbing off.) Oh, and the production team gave Marcus a free souvenir program as a gift for his birthday, because, well Marcus mentioned it to everyone he met. That was Friday. 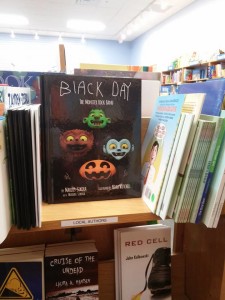 Saturday’s celebration began when Marlena Witchell posted on Facebook a pic of Black Day: The Monster Rock Band on the shelf at The Bookworm. “Awesome!” Marcus said.

At The Bookworm Omaha

Then, we thought better ride this good-day-train, and headed to the Craps table. Yup.

Craps is a game I don’t understand. Does anyone? I don’t know, but I’m drawn to it because it’s one of the few games, ironically, people actually look and sound like they’re having fun. There’s dice throwing and yelling and strange code words – what’s not to love? 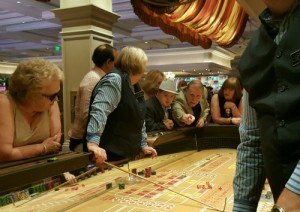 Well, anyway, Marcus has thrown the dice at Craps once before, on his 21st birthday at a casino close to home. SO, it’s been a few years. But he watched the person roll before him. He placed a few bets, 5 being his number.

Then came his turn to roll.

The casino folk were kind and festive and generous with their explanations of rules and bets. The table was surrounded by our clan plus a few unsuspecting gamblers who suddenly got pulled into the party. One of whom said to me, “Is this your son?”

“A blessing and a burden.” Is that what he said? I can’t recall exactly because moments like that always make my head loud.

He said something else, (again, my brain is loud now and I can’t hear as well) and soon followed with something like, “You are right to bring him here.” He turns back to the table. I nodded, I think. 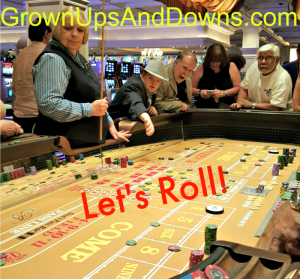 Now the whole world is loud because Marcus just threw a five and lots of folks at the table won. Everyone is whooping and hollering and I’m thinking, “Obviously.”

My dad said Marcus rolled about every number during his turn, “Well, he wants everyone to win.” I said.

I think everyone did win while Marcus rolled. When he inevitably rolled that seven, and his turn was over, the table erupted with cheers and praise for his game. Hey, it is a game folks and he played.

Then we “cashed out,” and loaded into a van to go to his next chosen show.

Showstoppers at the Wynn 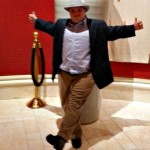 A Broadway review, of course. Quinn and Marcus and I got into our seats and settled early, lucky for us because we were offered to move up to third row center. Um. OK.

We were entirely thrilled and impressed with the performances. (Also the costumes. Beautiful Broadway meets Vegas costumes.) Serious talent knocking our socks off.

THEN – off to a casino bar for drinks and food! The waitress sang Marcus “Happy Birthday” and Marcus requested, “What about Hug?” which she very happily agreed to. I suspect our birthday song is what caught the attention of the anonymous bar patron who bought Marcus’ birthday dessert. My parents looked at me with delighted surprise and I assured them, Marcus consistently brings out the kindness in people.

By this time, Marcus was ready to go back to the condo. I played a bit of Wonder Woman slot machine, to no avail. I should leave the gambling to Marcus. Anyway, the clan split up, most of the family to move onto chocolate martinis and Marcus and I opted instead for a cab back home. 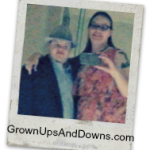 Where I changed into comfy clothes and Marcus told stories in the other room. Voices and stories and characters from a very busy brain. Then he settled down with a movie and eventually took himself to bed. I don’t know when, as I was long asleep.

Today we celebrate with pizza and ice cream and share the Black Day Book with our family here. Then it’ll be time to do laundry, pack up, and hit the road to AZ. We have our first public reading at the Buckeye Library on Tuesday then we go onto to Phoenix and NDSC. Will we see you there?