Why does Marcus have First Billing on the Book Black Day: The Monster Rock Band?

Today let’s discuss why Marcus Sikora, a young man with Down syndrome, has first credit for the book and why this is even a question.

I’ve written many words trying to share with you how the writing process with Marcus works. Most of those words still lay jumbled on a page not yet shared; they don’t touch the impact of the process. Some writers teach creatively and effectively about finding the right words, stories, books, novels, and art, some even write better about writing than anything else. Others are great all around. One author who both teaches and creates great stories is Chuck Wendig (Wendig is also profane to the extreme, vulgar, and uses sexual metaphors…a lot. If you don’t mind that sort of thing, and you’re an artist of any kind, you should read his stuff.) ANYway, I mention it now because one of his driving points is that to create a story you must be a storyteller. A STORYTELLER.

Enter Marcus. This is Marcus’ great talent. He is a storyteller. After Marcus and I decided that Black Day: The Monster Rock Band should be a children’s storybook, I started to struggle with the logistical difficulties of authorship, ownership, credit. Why? A few big, stupid reasons.

I guess it’s only right, in the spirit of full disclosure to let you, the audience, know: Marcus used assistive technology to create this book. It’s a limited model. It’s Me.

I often think of myself as Marcus’ closed captioning. Does close captioning make a message less valid? Does translating subtitles make an idea less worthy? It seems some people do actually feel this way, but I hope you don’t. I hope that you understand that when someone communicates to you their ideas, no matter what technology they have to go through to reach you, those ideas still hold value. This is paramount to appreciating what Marcus has to say and share and to experiencing his creative nature. You see, as his closed caption translator, I hear his ideas, I ask questions, I encourage his stories, and then I give them to you. This does not make the idea any less his. It is eternally annoying to me people who can’t/don’t appreciate Marcus because they 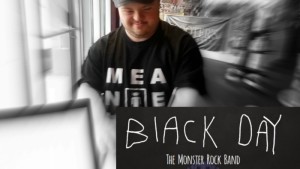 assume he has nothing to say. That’s akin to deciding that if you don’t speak French anything written or spoken in French is of no value, of no use. So, I have to thank Chuck Wendig for helping me to clarify, it would be an absolute lie to not credit Marcus first, because he is the storyteller. To deny his dialogue, his storyline, his amazing try/fail cycle, and his plot twists, or his vision and interpretation of these characters is unthinkable.

Marcus has an active mind and incredible imagination, however at this time he is not fully capable of making enough of the day-to-day decisions required for a fully “independent” life. Consequently, he is under the guardianship of his father and me. Also, he will require some sort of “safety net” for his care, likely for his entire life.

Why is this important to the concept of crediting him for his own story? Because in this country, even though built on the constitutional principles of “Life, Liberty, and the Pursuit of Happiness,” the possibility of Marcus reaching self-sufficient success is potentially a detrimental prospect. We live in a time and place where people with disabilities are kept at or below the poverty level as a matter of policy.

I’m not saying that I expect this book to make Marcus a rich man, but every author should have the right to dream that it could. As we placed the order for publication the ABLE Act was being debated in the Nebraska Unicameral. I’ll be honest; I let out a breath that this may be a positive step towards people at least being able to dream of achieving their own independence from government oppression and of possibility.

There are more logistical concerns, some of which I’m sure I don’t even know yet. (One will be the sheer paperwork – AGH I hate the paperwork.) But we have A LOT more books to sell before we reach that stage. Even so, I decided, without the consultation of an attorney,

No. As this is Marcus’ story, he gets the top credit. If he reaches a level of success that causes complications, well, truth wins out we will face that if it comes.

3) Writing is Actually a Cooperative Event

Most Writers have critiques, suggestions, and editors who affect the final work. In fact, every writer should. Marcus is part of a writing group called Chuck. Chuck saw an early draft and added their encouragement, thoughts, questions, and suggestions.

I went to a class or two on creating children’s books and learned to add in things like: “Knock, knock, knock,” and interactive questions like, “What do you think he saw?” There’s also one page that’s full of my words, I wanted to paint the picture for Marcus’ action. Every time, at every draft, I cringed a little at what looks to me to be obviously…me. Then reminded myself – “Hey! I get to say something. My name’s on the cover, too!”

And the focus stone in the cemetery as the monsters run through – that’s a cooperative between Quinn, Noah, and I, inspired by Marcus and others (see page 32 ☺).

What’s interesting to note is that no one who actually knows Marcus has shown any level of surprise that he’s written a book. Nada. These “explanation” conversations are only applicable to strangers, so, there’s that. In fact, I would have a lot of Explaining-to-Do to those who know Marcus if his name wasn’t on the cover, that’s for sure.

SO, if you haven’t had a chance to check out the book yet – check out the cover and teaser here. Amazon has their lovely, Look Inside feature at this link here:Black Day: The Monster Rock Band

if you want to peruse a few pages. If you’re looking for an autographed copy and you don’t live ‘round here, feel free to

and add into the “notes” portion of Paypal your autograph request. Marcus has just recently arranged for an office for his writing and shipping base of operations, so he’s ready to get you your book!

Feel free to leave a comment and if you want updates, including info about the upcoming DVD of the Black Day: The Monster Rock Band, join the club here.

Update: A few notes from our friends:

@MardraSikora You are right, we weren’t surprised at all he wrote a book

This is actually a #TBT post – as it was originally posted in July of 2015. I am posting it again today in the hopes we have some new readers come around. Are you new? Poke around to see more of our story and for email updates, not too frequently, Join the Club here.  And of course, there’s always a Facebook Page to Like. 🙂