Willpower (and being a healthy adult with Down syndrome) 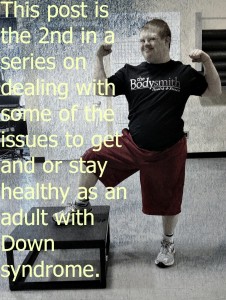 Don’t you hate it when a diet works? I do. I’m serious. I want to continue my bad habits and not have to worry about my growing hip size.  How about you?

Personally, I did one diet-plan that lasted 4 weeks and it proved to be the longest run of will-power I ever exhibited. Sad to admit. However, I talk a lot about what’s bad and what’s good, and apparently Marcus listens better than I do…to me.

And his willpower is better than mine, too. One day about a year ago, Marcus got into the car after a workout and said, “I’m not drinking pop* anymore.”

*Pop, by the way, is the Midwest euphemism for soda, coke, or soft-drink, depending on the part of the world you’re in.

“OK.” I said. Thinking that Brad, his fitness coach, must really have made an impact that day*.

*We will learn more about Brad and his wisdom later.

“Too much sugar,” Marcus told me.

“You’re right,” and in my supportive way, I did not offer him a sip of my Mountain Dew©.

Up to this point, Marcus had his own pops-of-choice. On his 21st birthday we had all the root beer you can drink. The bar stocked with various root beers in cans and bottles so that he, and others, could partake to their heart’s content. I suspect, as is the custom on a 21st birthday, he drank a bit too much, because after that night he didn’t want root-beer again.

But he moved on to orange pop. So on his 22nd birthday the bar where we celebrated stocked up on orange pop for him. But, it was shortly after that, he decided, the pop had to go.

I asked Brad what he said to convince Marcus of this change. He didn’t. He said Marcus came into the gym that day and told him, “I’m not drinking pop anymore.”

And that was that. Now, to be fair, there have been some sugary replacements which have found their way into his diet. When we go to restaurants he now orders lemonade. And when we have celebrations he has sparkling juice, which he calls champagne.

However, I have to think either of these options is still not as bad as a Coke© on any day.  He went completely cold turkey and has on rare occasion had pop if there are no other options available. (Maybe 5 or 6 times in the last year.)

And he’ll proudly tell you, “I don’t drink pop anymore.”

The point is, he decided himself to take this excellent step to better health. He has kept himself motivated and frankly, kicks my butt on the issue.

As a side note, last year on World Down Syndrome Day (3-21-12) I listened to the expert doctors that spoke on at The United Nations panel. I remember one of them indicating how impressed he often was with his patient’s willpower to make lifestyle changes when necessary to be a healthy adult with Down syndrome. (Sorry I don’t have exact reference here.) Interesting.

Next step this summer is to encourage Marcus to drink more water. Health experts vary on the exact amount each person needs, but let’s say 2-3 liters a day is a healthy amount for this young man. So if we can just get him to drink a bit more water and me to drink a bit less pop, we’ll both be healthier before fall.