Yes, Actually, These Opinions Are My Own

I still have Opinions

For some reason, I thought that with the election “out of the way” maybe the “political” posts would settle down and my opinions could be demonstrated simply by how I live my life.  However, we as a planet have entered an alternate universe and…

Yesterday I watched a small snippet on YouTube with standup comedian Dave Chappelle. It was old, by media standards, like 5 years or more.  In it, he talked about how white people don’t share their political opinions. “Who are you going to vote for” is a very private opinion. Of course, he said it in a hilarious way, and also, It’s true.

“You never ask someone who they voted for.”

The ballot is private. That is personal information.

I still feel very uncomfortable, even a bit affronted, if someone asks “Who did you vote for?” Again, the ballot is private. Frankly, nobody’s business but my own.

There are frequently assumptions made about my political beliefs, as is the case with everyone, I’m sure. What I think is funny is, if I have just met someone and we start talking about anything political, that new associate, acquaintance, whatever, speak like I must I agree with their political beliefs. I’m sure that’s an assumption made by association also with a bit of the false consensus at work. (Not to say I don’t sometimes agree, it’s just funny to me the way people assume I must.)

I take this as pretty solid proof that I’m, well, both.

About four years ago I went public with probably my most “political” post called, “Go ahead, piss me off, it’s your right.” In it:

…the short version is this: I’m glad to live in a country where it is your right to do and or say stuff that I wish you wouldn’t. It’s Your Right (For example,) I wish people wouldn’t burn flags. I think it goes beyond disrespectful to the men and women who make great sacrifices in a country that says – “OK, it’s your right to burn the flag.” I want that right protected, I wish people wouldn’t do it.

But Then There’s Business

The problems with opinions when you are in business, is that they can, on occasion, bite you in the ass. As a rule, I believe strongly in the “Vote with your dollars” mantra. If a business owner, or business model is not consistent with my values, I don’t give them my money. Because I am, at heart, a capitalist.

Let me give you an example. Trees. Do you know there are more trees on this planet now than easily 100 years ago? The reason why?

The short version is this: businesses that rely upon trees for their future realized –

Hay! WE CAN’T MAKE MONEY WITHOUT TREES! Let’s figure out ways to have plenty of trees for, like, ever.

And so science found ways to make faster growing trees, we have tree farms, and we have recycling as a standard (not the exception).

Which makes me sad because it helps the (unsaid company name) family make more money and not many others. Maybe it helps some investors who have no say or even knowledge of the processes involved. I don’t know how to break or even escape this conundrum, except…Except by trying to live my life, one person at a time.  I not only believe that good business is important to families, I think good government is a key role in facilitating business’ ability to do this. Good government helps, bad policy gets in the way, small and mid-size businesses are often “collateral damage” of government decisions and that hurts the economy, the workers, the families…you get the idea.

SO – back to the opinion and business. Until this political season, I had never encountered in my adult life so many human rights to be considered a political argument.

Here’s the deal. If civil rights are political – then I am going to have to be political now and then.

The people I love and respect agree on this:

“We hold these truths to be self-evident, that all men are created equal, that they are endowed by their Creator with certain unalienable Rights, that among these are Life, Liberty and the pursuit of Happiness.–That to secure these rights, Governments are instituted among Men, deriving their just powers from the consent of the governed, –That whenever any Form of Government becomes destructive of these ends, it is the Right of the People to alter or to abolish it, and to institute new Government, laying its foundation on such principles and organizing its powers in such form, as to them shall seem most likely to affect their Safety and Happiness. Prudence, indeed, will dictate that Governments long established should not be changed for light and transient causes; and accordingly, all experience hath shewn, that mankind is more disposed to suffer, while evils are sufferable, than to right themselves by abolishing the forms to which they are accustomed. But when a long train of abuses and usurpations, pursuing invariably the same Object evinces a design to reduce them under absolute Despotism, it is their right, it is their duty, to throw off such Government, and to provide new Guards for their future security.” –  The Declaration of Independence.

This country was founded based on big dreams of equality and pursuit of happiness. Also, it was founded by people who wanted it to last, who took this solid foundation seriously, as do I.

Some people I consider friends, business partners, and other associates (and most often my husband), do not always (or in the case of my husband, often) agree on how to get to the end game of a prosperous and safe climate for the majority the world’s population, but we do agree that this is important and work has to be done to facilitate a better world. 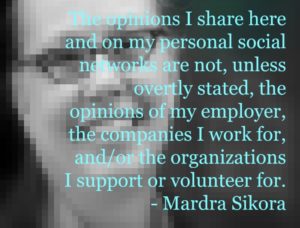 Alright, so, where was I? Right. Official disclaimer: The opinions I share here and on my personal social networks are not, unless overtly stated, the opinions of my employer, the companies I work for, and/or the organizations I support or volunteer for.

1) I not only uphold the nondiscrimination policies in place at my place of business but I agree with the practice and implementation.

2) No matter how we disagree on “how to get there” I will continue to surround myself with people who also agree that human rights shouldn’t have to be fought for, asked for, or given – they should be assumed and afforded. Also, I align myself with people who understand that this is not the case currently, both in other countries and in our own. That many people consistently endure real and present threats to their rights in addition to many others who endure a variety of slights that make up the obstacles to the “pursuit of happiness’ and both of these issues are valid and constant AND this can and should be changed.

The fact that human rights is a “political” sentiment still, in our day and age, is both infuriating and heartbreaking, but here we are and here we go.