Yet Another Lesson From Marcus 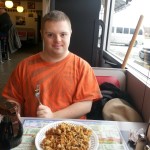 Last year I shared the secret to getting a good tip. Today’s restaurant lesson is about making friends.

When Marcus and I went out to lunch, we went to a spot where you could begin to call us “regulars.” The ritual is this: we sit, we decide what we want, we order, we take out our computers, I work on whatever I’m working on and Marcus sets up his IPad and headphones and works on whatever he’s working on.

Today during the eating portion of our lunch, as the waitress was refilling my coffee, she leaned a bit closer to me and whispered, “Is he your son?”

I smiled at him and nodded, “That’s true. He is adorable.” I probably laughed a little at this point, because I do that.

She stepped away and a look of discomfort crossed Marcus’ face. He mumbled something about a joke. For the record, Marcus does not like being called cute, for example, because he thinks that term is for children. Adults – guys – are not called cute as far as he’s concerned. I expect adorable may also fall into that category. Or perhaps worse, did he think we were making fun of him?

“No,” I told him, “We were not making a joke.” I rambled then a bit, having some difficulty explaining the conversation. So I decided to sum it up instead with, “She was just saying that she is your friend.”

Those were the magic words. A light above his head, “Oh. Friend.” That’s something Marcus can get behind. So then we were good. But then we got better because the next time the waitress came by Marcus looked up at her and put out his hand, she took it, and he said, “Thank you for being my friend.”

I urge you to take a moment and capture that picture in your mind. A waitress nearing the end of her shift,
Marcus with hand extended and his voice and face showing true sincerity for her extension of friendship.

“We are all your friends here,” she replied, “But if we’re friends, we need to know your name.”

“My name is Marcus.”

It’s hard to explain moments like these, my dialogue recreation does not do it justice, simple as it is, including the “Bye Marcus!” from more than one server as we headed out the door.

And there, dear reader, is Marcus’ lesson in making friends.